ReadAboutContentsHelp
See record at the Library of Virginia Digital Collections. 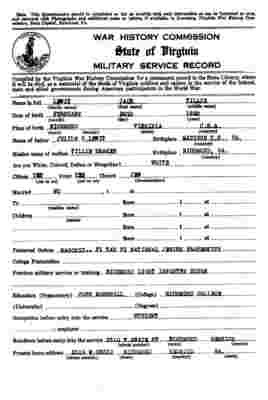 Are you White, Colored, Indian or Mongolian: WHITE

Citizen (Yes or no): Yes

Occupation before entry into service: STUDENT

Residence before entry into the service 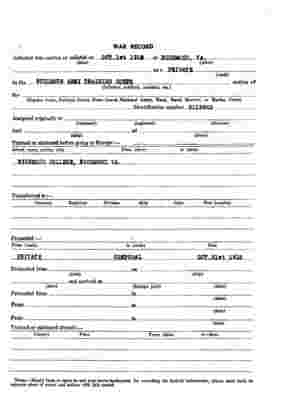 as a (rank): PRIVATE

in the: STUDENTS ARMY TRAINING CORPS

Trained or stationed before going to Europe:-

and arrived at (foreign port): 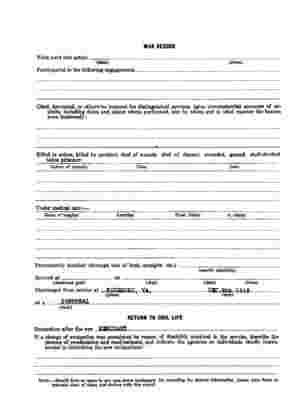 Participated in the following engagements:

Cited, decorated, or otherwise honored for distinguished services (give circumstantial accounts of exploits, including dates and places where performed, also by whom and in what manner the honors were bestowed): :

as a (rank): CORPORAL

Occupation after the war: MERCHANT

If a change of occupation was occasioned by reason of disability acquired in the service, describe the process of re-education and readjustment, and indicate the agencies or individuals chiefly instrumental in furnishing the new occupations:: 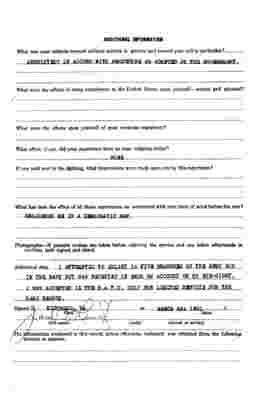 What was your attitude toward military service in general and toward your call in particular?: ABSOLUTELY IN ACCORD WITH PROCEDURE AS ADOPTED BY THE GOVERNMENT.

What were the effects of camp experiences in the United States upon yourself -- mental and physical?:

What were the effects upon yourself of your overseas experience?:

What effects, if any, did your experience have on your religious belief?: NONE

If you took part in the fighting, what impressions were made upon you by this experience?:

What has been the effect of all these experiences as contrasted with your state of mind before the war?: BROADENEDD ME IN A DEMOCRATIC WAY.

Photographs-- If possible enclose one taken before entering the service and one taken afterwards in uniform, both signed and dated.

Additional data: I ATTEMPTED TO ENLIST IN FIVE BRANCHES OF THE ARMY AND IN THE NAVY BUT WAS REJECTED IN EACH ON ACCOUNT OF MY EYE-SIGHT. I WAS ACCEPTED IN THE S.A.T.C. ONLY FOR LIMITED SERVICE FOR THE SAME REASON.

The information contained in this record, unless otherwise indicated, was obtained from the following persons or sources::