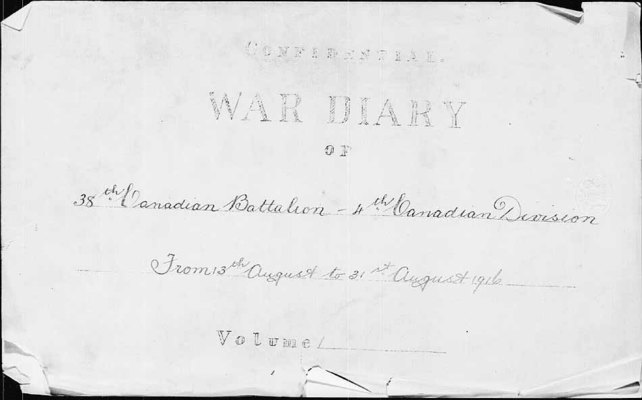 Last edit over 1 year ago by OOG 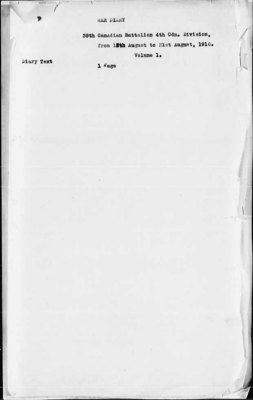 Last edit over 1 year ago by Susan R 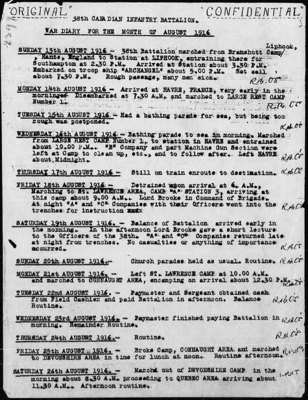 TUESDAY 15th AUGUST 1916 - Had a bathing parade for sea, but being too rough was postponed.

WEDNESDAY 16th AUGUST 1916 - Bathing parade to sea in morning. Marched from LARGE REST CAMP Number 1, to station in HAVRE and entrained about 10.00 P.M.. "B" Company and part Machine Gun Section were left at Camp to clean up, etc., and to follow after. Left HAVRE about Midnight.

FRIDAY 18th AUGUST 1916 - Detrained upon arrival at 6. A.M., Marching to St. LAWRENCE AREA, CAMP "A" STATION 3, arriving at this camp about 9.00 A.M.. Lord Brooke in Command of Brigade. At night "A" and "C" Companies with their Officers went into the trenches for instruction

SATURDAY 19th AUGUST 1916 - Balance of Battalion arrived early in the morning. In the afternoon Lord Brooke gave a short lecture to the Officers of the 38th. "A" and "C" Companies returned later at night from trenches. No casualties or anything of importance occurred.

SATURDAY 26th AUGUST 1916 - Marched out of DEVONSHIRE CAMP in the morning about 8.30 A.M. proceeding to QUEBEC AREA arriving about 11.30 A.M.. Afternoon routine.

Last edit 9 days ago by Guest User
All 3 records