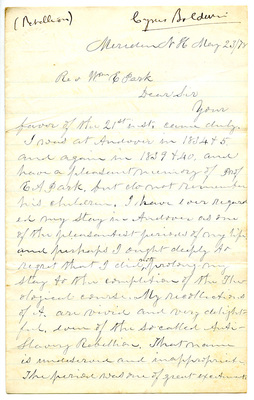 Your favor of the 21st inst. came duly. I was at Andover in 1834 & 5 and again in 1839 & 40, and have a pleasant memory of Prof E A Park, but do not remember his children. I have ever regard ed my stay in Andover as one of the pleasantest periods of my life, and perhaps I ought deeply to regret that I did not prolong my stay to the completion of the Theological course. My recollections of it are vivid and very delightful, even of the so-called AntiSlavery Rebellion. That name is undeserved and inappropriate. The period was one of great excitement. 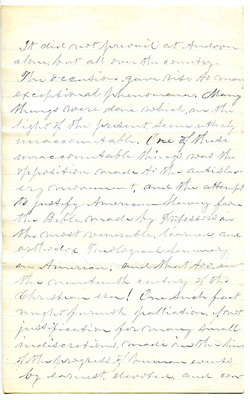 It did not prevail at Andover alone, but all over the country. The occasion gave rise to many exceptional phenomena. Many things were done which, in the light of the present seem utterly unaccountable. One of these unaccountable things was the opposition made to the antislavery movement, and the attempt to justify American slavery from the Bible, made by Professors in the most venerable, learned, and orthodox Theological Seminary in America; and that [?] in the nineteenth century of the Christian era! One such fact might furnish palliation, if not justification for many small indiscretions made in the time of the progress of American events by earnest, elevated, and con- 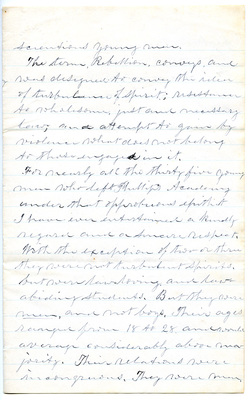 The term, Rebellion, conveys, and seems designed to convey the idea of turbulence of spirit; resistance to wholesome, just and necessary law; an [crossed out] attempt to gain by violence what does not belong to those engaged in it.

For nearly all the thirty five young men who left Phillips Academy under that opprobrious epithet I have ever entertained a kindly regard and a sincere respect. With the exception of two or three they were not turbulent spirits, but were law-loving and lawabiding students. But they were men, and not boys. Their ages ranged from 18 to 28, and would average considerably above majority. Their relations were incongruous. They were men, 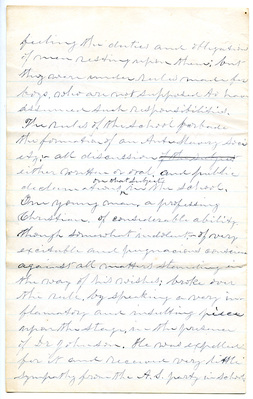 feeling the duties and obligations of men resting upon them; but they were under rules made for boys, who are not supposed to have assumed such responsibilities. The rules of the school forbade the formation of an Anti-Slavery society; all discussion [crossed out: of the subject] either written or oral, and public declamation ^on that subject^ in the school. One young man, a professing Christian of considerable ability though somewhat indolent, of very excitable and pugnacious conscience against all matters standing in the way of his wishes: broke over the rule, by speaking a very inflammatory and insulting piece upon the stage, in the presence of Dr Johnson. He was expelled for it and received very little sympathy from the A.S. party in school. 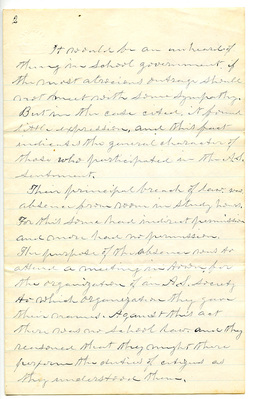 It would be an unheard of thing in school government if the most atrocious outrage should not meet with some sympathy. But in the case cited, it found little expression, and this fact indicates the general character of those who participated in the A.S. sentiment.

Their principal breach of law, was, absence from room in study hours. For this some had indirect permission and more had no permission. The purpose of the absence was to attend a meeting in town, for the organization of an A.S. society to which organization they gave their names. Against this act there was no school law, and they reasoned that they might there perform the duties of citizens as they understood them.