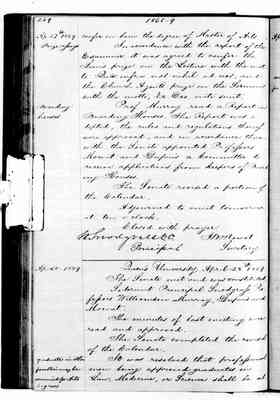 confer on him the degree of Master of Arts.

In accordance with the report of the Examiner it was agreed to confer the Lewis prize on the Lecture with the mot. to Quo infro nos nihil ad nos, and the Church Agent's prize on the Sermon the the motts, Ex Deo norti sunt.

Prof. Murray read a Report on Boarding Houses. The Report was adopted, the rules and regulations thereof were approved, and in accordance therewith the Senate appointed Professors Mowat and Dupuis a Committee to receive applications from keepers of Boarding Houses.

The Senate revised a portion of the Calendar.

The Senate completed the revisal of the Calendar.

It was resolved that professional men being approval graduates in Law, Medicine, or Science shall be admitted 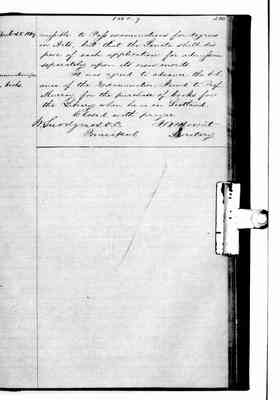 admissible to Pass examinations for degrees in Arts, but that the Senate shall dispose of each application for admission separately upon its own merits.

It was agreed to advance the balance of the Examination Fund to Prof. Murray for the purchase of books for the Library when he is in Scotland. 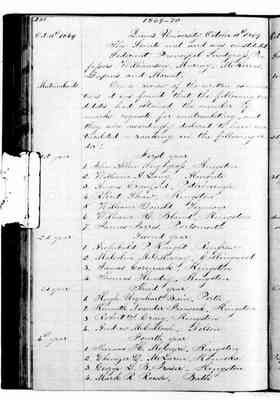 On a review of the written examinations it was found that the following candidates had obtained for matriculating, and they were accordingly declared to have matriculated - ranking in the following order: 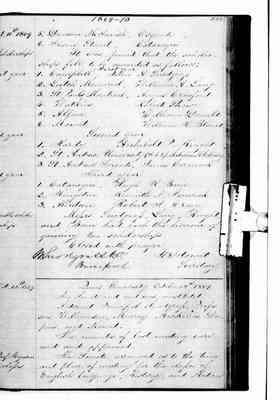 It was found that the scholarships fell to be awarded as follows:

Messrs. Snodgrass, Lang, Knight and Bain had each the honour of gaining two scholarships.

The Senate arranged as to the time and place of meeting for the classes of English language, History, and Modern 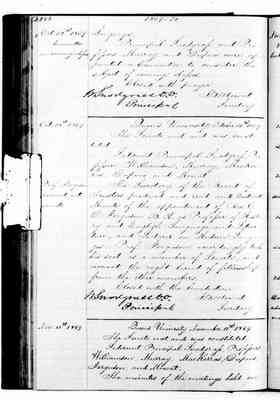 Principal Snodgrass and Professors Murray and Dupuis were appointed a Committee to consider the subject of evening classes.

The Secretary of the Board of Trustees produced and read an Extract Minute of the appointment of Rev. G. D. Ferguson, B.A. as Professor of History and English Language and Literature, and Lecturer on Modern Languages. Prof. Ferguson accordingly took his seat as a member of Senate, and received ther right hand of fellowship from the other members.

The minutes of the meetings held on 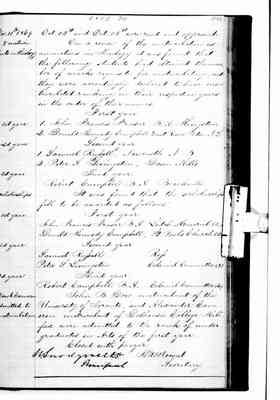 On a review of the matriculation examinations in Theology it was found that the following students had obtained the number of marks required for matriculating, and they were accordingly declared to have matriculated ranking in their respective years in the order of their names.

It was found that the scholarships fell to be awarded as follows:

John B. Dow matriculant of the University of Toronto, and Alexander Cameron matriculant of Dalhousie College Halifax were admitted to the rank of undergraduates in Arts of the first year. 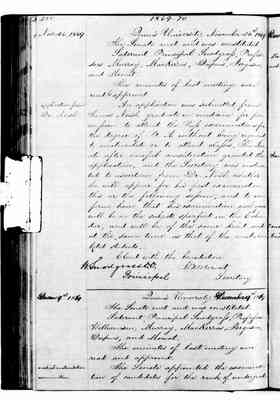 The minutes of last meeting were read & approved.

The application was submitted from James Neish graduate in medicine for permission to attend the Pass examinations for the degree of B.A. without being required to matriculate or to attend classes. The Senate after careful consideration granted the application, and the Secretary was instructed to ascertain from Dr. Neish whether he will appear for his first examination this or the following session, and to inform him that his examination each year will be on the subjects specified in the Calendar, and will be of the same kind and at the same time as that of the matriculated students. 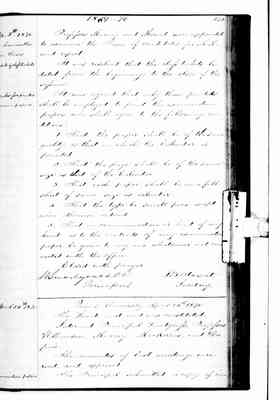 Professors Murray and Mowat were appointed to examine the Theses of candidates for M.A. and report.

It was resolved that the class tickets be dated from the beginning to the close of the session.

It was agreed that only those printers shall be exployed to print the examination papers who shall agree to the following conditions:

1. That the paper shall be the same quality as that which the Calendar is printed.

2. That the page shall be of the same size as the Calendar.

3. That each paper shall be on a full sheet of same size as calendar.

4. That the type be small pica except when otherwise ordered.

5. That no communication or hint of any kind as to the contents of any examination paper be given to any one whatsoever not connected with the office.

The mintes of last meeting were read and approved.

The Principal submitted a copy of in 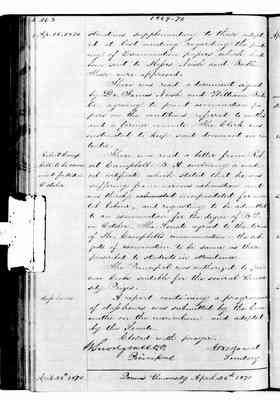 [in]structions supplementary to those adopted at last meeting regarding the printing of Examination papers which had been sent to Messrs Neish and Baillie. Theses were approved.

There was read a document signed by Dr. James Neish and William Baillie, agreeing to print examination papers on the conditions referred to in this and a former minute. The Clerk was instructed to keep said document in retentis.

[margin] Robert Campbell to be examined for B.D. in October [/margin]

There was read a letter from Robert Campbell B.A. enclosing a medical certificate which stated that he was suffering from nervous exhaustion and was thereby exhausted incapacitated for mental labour, and requesting to be admitted to an examination for the degree of B.D. in October. The Senate agreed to the terms of Mr. Campbell's communication - the subjects of examination to be same as those prescribed to students in attendance.

The Principal was authorized to procure books suitable for the several University Prizes.

A report containing a programme of class hours was submitted by the Committee on the curriculum and adopted by the Senate. 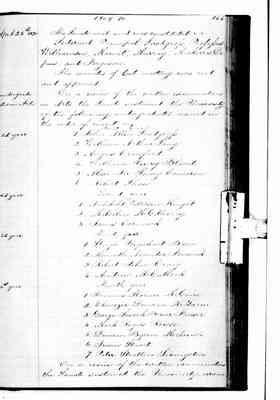