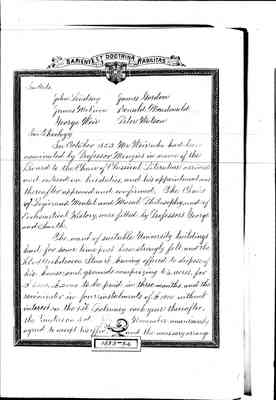 In October 1853 Mr Weir who had been nominated by Professor Menzies in name of the Board to the Chair of Classical Literature arrived and entered on his duties, and his appointment was thereafter approved and confirmed. The Chairs of Logic, and Mental and Moral Philosophy, and of Ecclesiastical History, were filled by Professors George and Smith.

The want of suitable University buildings had for some time past been strongly felt, and the Revd Archdeacon Stuart having offered to dispose of his house and grounds comprizing 6 1/2 Acres, for £ 6000, £ 2000 to be paid in three months, and the remainder in four instalments of £ 1000 without interest on the 1st February each year thereafter, the Trustees on 3rd. November unanimously agreed to accept his offer, and the necessary arrange- 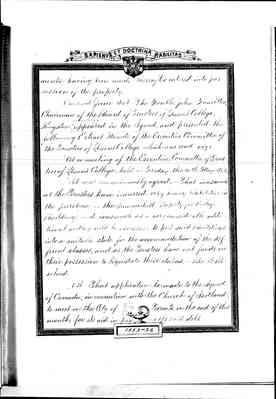 ments having been made thereafter entered into possession of the property.

"At a meeting of the Executive Committee of Trustees of Queen's College, held on Friday the 12th May 1854.

"It was unanimously agreed, - That inasmuch as the Trustees have incurred very heavy liabilites in the purchase of the Summerhill Property for College Buildings and insomuch as a very considerable additional outlay will be necessary to put said Buildings into a suitable state for the accomodation of the different classes; and as the Trustees have not funds in their possession to liquidate these claims -Be it Resolved

1st. That application be made to the Synod of Canada, in connection with the Church of Scotland, to meet in the City of Toronto, in the end of this month, for its aid in paying off said debt. 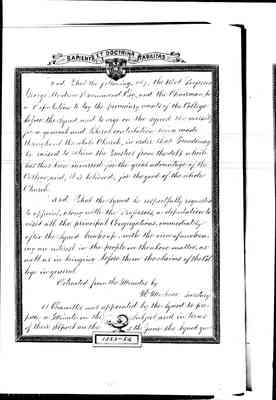 "2nd That the following, viz. the Revd Professor George, Andrew Drummond, Esq., and the Chairman, be a Deputation to lay the pecuniary wants of the College before the Synod, and to urge on the Synod the necessity for a general and liberal contribution being made throughout the whole Church, in order that Funds may be raised to relieve the Trustees from the debt which has thus been incurred for the great advantage of the College, and, it is believed, for the good of the whole Church.

"3rd. That the Synod be respectfully requested to appoint, along with the Professors, a deputation to visit all the principal Congregations, immediately after the Synod breaks up, with the view of awakening an interest in the people in the above matter, as well as in bringing before them the claims of the College in general.

"Extracted from the Minutes by W. Mc Iver. Secretary"

A Committee was appointed by the Synod to prepare a Minute on the Subject, and in terms of their Report on the 5th June the Synod gave 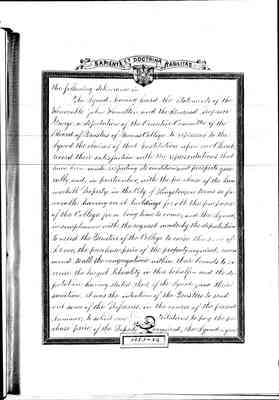 the following deliverance:"The Synod, having heard the Statements of the Honorable John Hamilton and the Reverend Professor George, a deputation of the Executive Committee of the Board of Trustees of Queens College to represent to the Synod the claims of that Institution upon our Church, record their satisfaction with the representations that have been made respecting its condition and prospects generally, and, in particular, with the purchase of the Summerhill Property in the City of Kingston, on terms so favorable having on it buildings for all the purposes of the College for a long time to come; and the Synod, in compliance with the request made by the deputation to assist the Trustees of the College to raise the sum of [pound symbol]6,000, the purchase price of the property acquired, recommend to all the congregations within their bounds to exercise the largest liberality in this behalf:- and the deputation having stated that, if the Synod gave their sanction, it was the intention of the Trustees to send out some of the Professors, in the course of the present Summer, to solicit contributions to pay the purchase price of the Property acquired, the Synod agrees 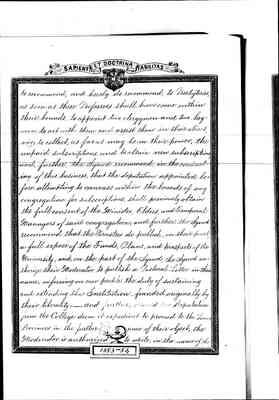 to recommend, and hereby do recommend, to Presbyteries, as soon as these Professors shall have come within their bounds, to appoint two clergymen and two laymen to act with them and assist them in their object, viz: to collect, as far as may be in their power, the unpaid subscriptions, and to obtain new subscriptions and, further, the Synod recommend, in the conducting of this business, that the deputation appointed, before attempting to canvass within the bounds of any congregation for subscriptions, shall previously obtain the full consent of the Minister, Elders, and Temporal Managers of said congregation, and further, the Synod recommend, that the Trustees do publish, on their part a full expose` of the Funds, Plans, and prospects of the University, and, on the part of the Synod, the Synod authorize their Moderator to publish a Pastoral Letter in their name, enforcing on our people the duty of sustaining and extending this Institution, founded originally by their liberality:-- and further, should the Deputation from the College deem it expedient to proceed to the Lower Provinces in the furtherance of their object, the Moderator is authorized to write in the name of the