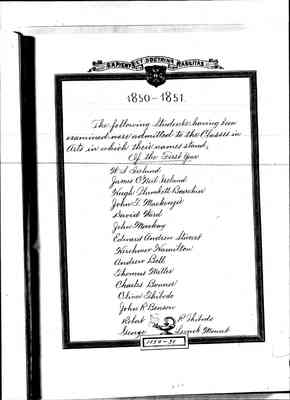 The following students having been examined were admitted to the Classes in Arts in which their names stand; 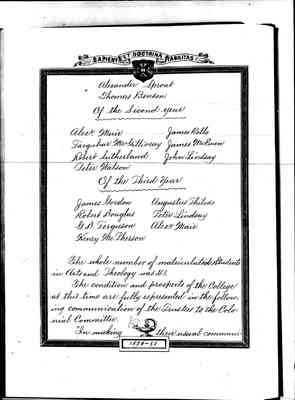 The whole number of matriculated Students in Arts and Theology was 41.

The condition and prospects of the College at this time are fully represented in the following communication of the Trustees to the Colonial Committee.

"In making their usual commmuni-

Last edit about 2 years ago by RD98 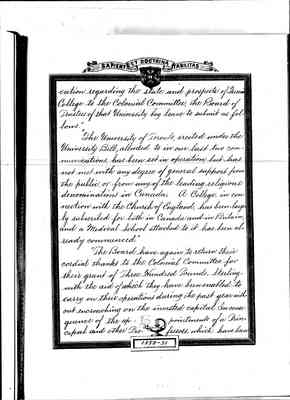 cation regarding the state and prospects of Queen's College to the Colonial Committee, the Board of Trustees of that University beg leave to submit as follows."

"The University of Toronto, erected under the University Bill, alluded to in our last two communications, has been set in operation, but has not met with any degree of general support from the public, or from any of the leading religious denominations in Canada. A College, in connection with the Church of England, has beem largely subscribed for both in Canada and in Britain, and a Medical School attached to it has been already commenced."

"The Board have again to return their cordial thanks to the Colonial Committee for their grant of Three Hundred Pounds, Sterling, with the aid of which they have been enabled to carry on their operations during the pas year without encroaching on the invested capital. In consequence of the appointments of a Principal and other Professors, which have been 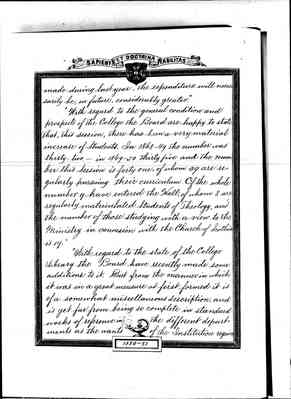 made during last year, the expenditure will necessarily be, in future, considerably greater."

"With regard to the general condition and prospects of the College the Board are happy to state that, this session, there has been a very material increase of Students. In 1848-49 the number was thirty-two, -in 1849-50 thirty five and the number this Session is forty one, of whom 39 are regularly pursing their curriculum. Of the whole number 9 have entered the Hall, of whom 8 are regularly matriculated Students of Theology, and the number of those studying with a view to the Ministry in connexion with the Church of Scotland is 19."

"With regard to the state of the College Library the Board have recently made some additions to it. But from the manner in which it was in a great measure at first formed it is of a somewhat miscellaneous description, and is yet far from being so complete in standard works of reference in the different departments as the wants of the Institution required." 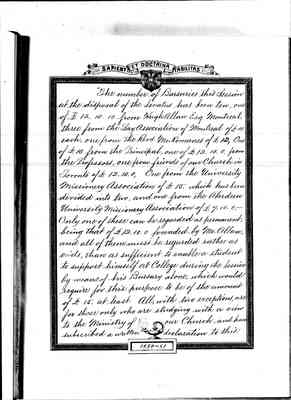 "The number of Bursaries this Session at the disposal of the Senatus has been ten, one of £ 12. 10. 10 from Hugh Allan Esq. Montreal, three from the Lay Association of Montreal of £10. each, one from the Principal, one of £ 12. 10. 0. from the Professors, one from friends of our Church in Toronto of £ 12. 10. 0, One from the University Missionery Association of £ 15, which has been divided into two, and one from the Aberdeen University Missionery Association of £ 7. 10. 0. Only one of these can be regarded as permanent, being that of £ 12. 10. 0 founded by Mr. Allan, and all of them must be regarded rather as aids, than as sufficient to enable a student to support himself at College during the Session by means of his Bursary alone, which would require for this purpose to be of the amount of £15, at least. All, with two exceptions, are for those who are studying with a view to the Ministry of our Church, and have subscribed a written declaration to this