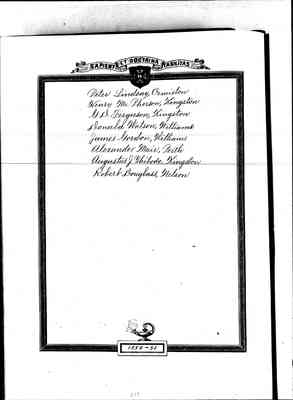 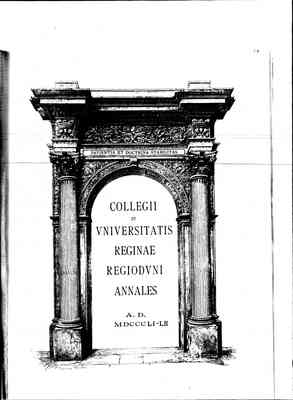 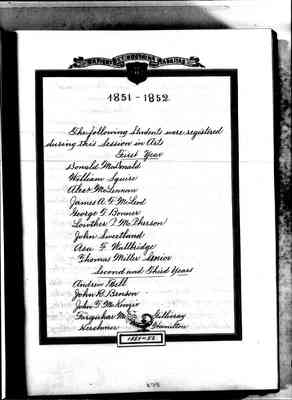 The following Students were registered during this Session in Arts 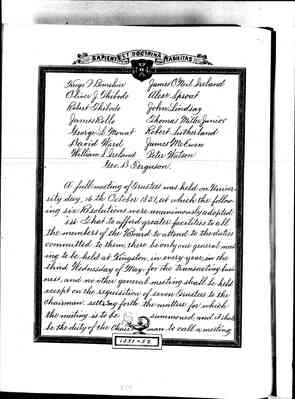 A full meeting of Trustees was held on University day, 16th October 1851, at which the following six Resolutions were unanimously adopted.

"1st That to afford greater facilities to all the members of the Board to attend to the duties committed to them, there be only one general meeting, to be held at Kingston, in every year, on the third Wednesday of May, for the transacting business, and no other general meeting shall be held except on the requisition of seven Trustees to the Chairman, setting forth the matters for which the meeting is to be summoned, and it shall be the duty of the Chairman to call a meeting, 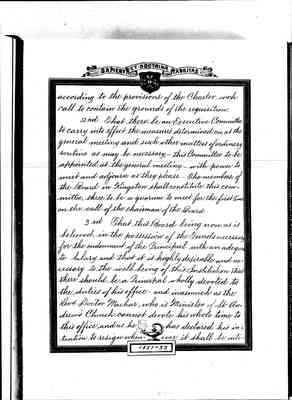 according to the provisions of the Charter, such call to contain the grounds of the requisiton.

2nd. That there be an Executive Committee to carry into effect the measures determined on at the general meeting and such other matters of ordinary routine as may be necessary, - this Committee to be appointed at the general meeting -with power to meet and adjourn as they please -The members of the Board in Kingston shall constitute this committee, three to be quorum to meet for the first time on the call of the chairman of the Board.

3rd. That this Board being now, as is believed, in the possession of the Funds necessary for the endowment of the Principal with an adequate Salary, and that it is highly desirable and necessary to the well being of this Institution that there should be a Principal wholly devoted to the duties of his office -and inasmuch as the Revd Doctor Machar, who is Minister of St. Andrew's Church, cannot devote his whole time to this office, and as he declared his intention to resign whenever it shall be inti-