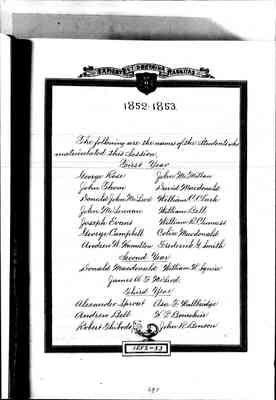 The following are the names of the Students who matriculated this Session; 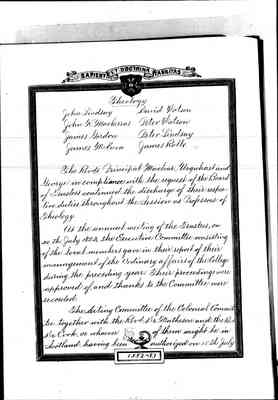 The Revds. Principal Machar, Urquhart and George in compliance with the request of the Board of Trustees continued the discharge of their respective duties throughout the Session as Professors of Theology.

At the annual meeting of the Trustees, on 20th July 1853, the Executive Committee consisting of the local members gave in their report of their management of the Ordinary affairs of the College during the preceding year. Their proceedings were approved of, and thanks to the Committee were recorded.

The Acting Committee of the Colonial Committee together with the Revd Dr. Matheson and the Revd Dr. Cook, or whoever of them might be in Scotland having been authorized on 15th July 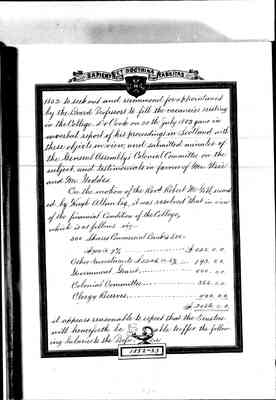 1852 to seek out and recommend for appointment by the Board Professors to fill the vacancies existing in the College, Dr. Cook on 20th July 1853 gave in a verbal report of his procedings in Scotland with these objects in view, and submitted minutes of the General Assembly's Colonial Committee on the subject, and testimonials in favour of Mr. Weir and Mr. Geddes. 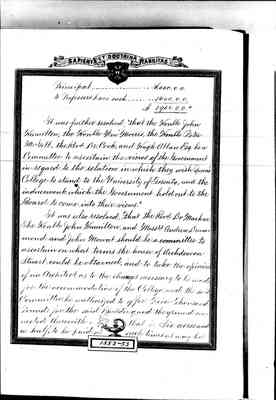 It was further resolved, "that the Honble John Hamilton, the Honble Wm Morris, the Honble Peter McGill, the Revd Dr. Cook, and Hugh Allan Esq. be a Committee to ascertain the views of the Government in regard to the relation in which they wish they wish Queen's College to stand to the University of Toronto, and the inducements which the Government hold out to the Board to come into their views."

It was also resolved, "that the Revd Dr Machar, The Honble John Hamilton, and Messrs Andrew Drummond and John Mowat should be a committee to ascertain on what terms the house of Archdeacon Stuart could be obtained, and to take the opinion of an Architect, as to the changes necessary to be made for the accomodation of the College, and the said Committee be authorized to offer Five Thousand Pounds for the said Building, and the ground connected therewith, that is Six acres and a half, to be paid at such times as may be 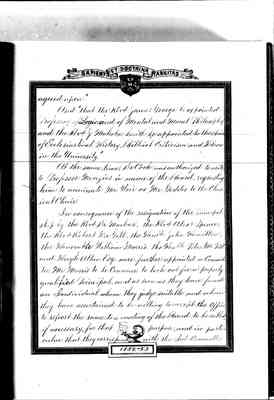 And "that the Revd James George be appointed Professor of Logic and of Mental and Moral Philosophy and the Revd J. Malcolm Smith be appointed to the Chair of Ecclesiastical History, Biblical Criticism and Hebrew in the University."

At the same time, Dr Cook was authorized to write to Professor Menzies in name of the Board, requesting him to nominate Mr. Weird or Mr Geddes to the Cloassical Chair.

In consequence of the resignation of the Principalship by the Revd Dr. Machar, the Revd Alexr Spence, the Revd Robert McGill, the Honble John Hamilton, the Honorable William Morris, the Honble Peter McGill and Hugh Allan Esq were further appointed a Committee, Mr Morris to be Convener, to look out for a properly qualified Principal, and as soon as they have found an Individual whom they judge suitable and whom they have ascertained to be willing to accept the Office to report the same to a meeting of the Board to be called, if necessary, for that purpose, and in particular that they correspond with the Sub-Committee