Following the closure of the Moreton Bay penal settlement in 1842, tenders were called in 1847 to convert the Female Factory in Queen Street to a gaol. On 14 December 1849, the altered building was proclaimed a prison known as the Gaol, Brisbane. A new gaol was built at Petrie Terrace in 1860 and subsequently, from 1883, prison buildings for male and female prisoners were erected at a site in South Brisbane and called The Brisbane Gaol. This Brisbane prison became known as Boggo Road Gaol. Queensland prisons kept records of prisoners' admissions, criminal history and physical descriptions, either separately or combined in the same register. Photos were taken by the Police Department, Criminal Investigation Branch and copies forwarded to the Police Commissioner's Office for distribution to prisons and police stations throughout the state as well as to interstate police. Information given includes: a front photograph of the prisoner from the shoulders up (sometimes the profile as well and, in one case, the whole standing person); name (and alias/es); prisoner number; ethnicity, if not white; date portrait taken; native place of origin; year of birth; ship and year when arrived in Colony; occupation or trade previous to conviction; religion; education; height; weight on committal; colour of hair and eyes; marks or special features; where and when tried; offence; sentence; remarks (including when executed); past criminal history (where convicted, when, offence, and sentence. Each page includes the stamp of the Brisbane prison and the stamp of the Executive Council, Queensland and date. 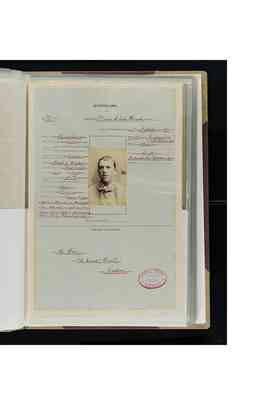