Henry George Grey (1802-1894), politician, was born on 28 December 1802 at Howick House, Northumberland, England, the eldest son of Charles, second Earl Grey ('Lord Grey of the Reform Bill'), and his wife Mary Elizabeth, daughter of William Brabazon Ponsonby. He was known as Viscount Howick from 1807 until he succeeded to the earldom in July 1845.
In 1846 Grey was given the Colonial Office in Lord John Russell's administration. He showed himself a fervid, doctrinaire free trader, an ardent believer in high imperial responsibility towards the colonies, and a forceful, impatient administrator. His triumphs were won mainly in British North America. The Australian colonies never raised him to comparable levels of interest and statesmanship. Their convict origins, their very recent establishment and their unfortunate lack of outstanding governors combined to make him uninstructed and high-handed in his Australian policies. The lack of sympathy between Grey and Sir Charles FitzRoy was particularly significant. (https://adb.anu.edu.au/biography/grey-henry-george-2126) 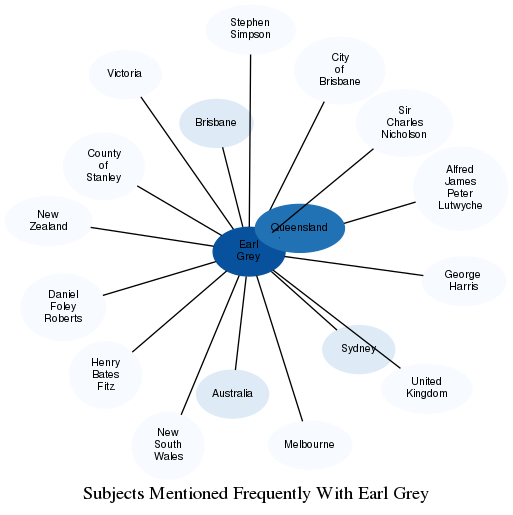 The graph displays the other subjects mentioned on the same pages as the subject "Earl Grey". If the same subject occurs on a page with "Earl Grey" more than once, it appears closer to "Earl Grey" on the graph, and is colored in a darker shade. The closer a subject is to the center, the more "related" the subjects are.

Show pages that mention Earl Grey in all works