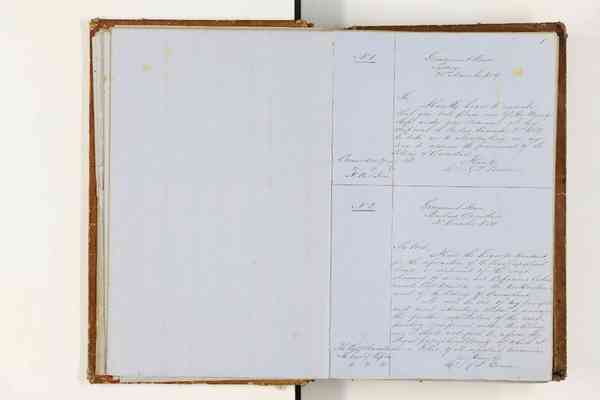 I have the honor to request that you will place one of Her Majesty's ships under your command at my disposal on Friday December, 2nd 1859, to take me to Moreton Bay on my way to assume the Government of the Colony of Queensland.

I have the honor to transmit, for the information of the Royal Geographical Society, a statement of the recent discovery of a new and Capacious harbour, named Port Denison, on the North Eastern coast of the Colony of Queensland.

It will be one of my principal and most interesting duties to encourage the further exploration of the vast territory comprised within this Colony, and I shall not fail to inform the Royal Geographical Society, of which I am a fellow, of all important discoveries. 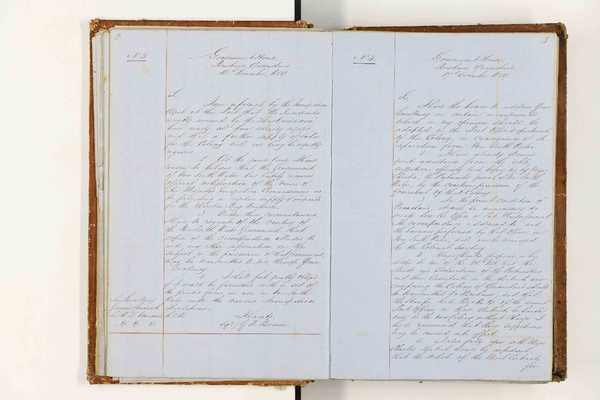 I am informed by the Immigration Agent at this Port that the Immigrants recently arrived by the "Shackamaxon" have nearly all been already engaged, and that further supply of labor for this Colony will ene long be urgently required.

2. At the same time I have reason to believe that the Government of New South Wales has lately received official notification of the views of Her Majesty's Emigration Commissioners as to providing a regular supply of Emigrants for the Moreton Bay Districts.

3. Under these circumstances, I have to request of the courtesy of the New South Wales Government that copies of the correspondence alluded to, and any other information on the subject in the possession of that Government, may be transmitted to me through Your Excellency.

4. I shall feel greatly obliged if I could be furnished with a set of the printed forms in use in New South Wales under the various Immigration Regulations.

I have the honor to address Your Excellency on certain arrangements which, in my opinion, should be adopted in the Post Office Department of this Colony, in consequence of its separation from New South Wales.

2. I have already derived great assistance from the able suggestions officially laid before me by Major Christie, the Postmaster General of New South Wales, by the courteous permission of the Government of that Colony.

3. In the present condition of Queensland, it will be unnecessary to create here the Office of the Post Master General. The correspondence addressed to, and the business performed by that Officer in New South Wales, will now be managed by the Colonial Secretary.

4. Major Christie proposed, in his letter to me of the 20th Ult. that the Bonds and Declarations of the Postmasters and their Assistants in the districts now composing the Colony of Queensland should be transmitted to Brisbane; and that the Stamps, Seals, Books &c. of the several Post-Offices in those districts should be handed over to the new Colony without charge, I beg to recommend that these suggestions may be carried into effect.

5. I also fully agree with Major Christie that it would be expedient that the whole of the Mail Contracts for 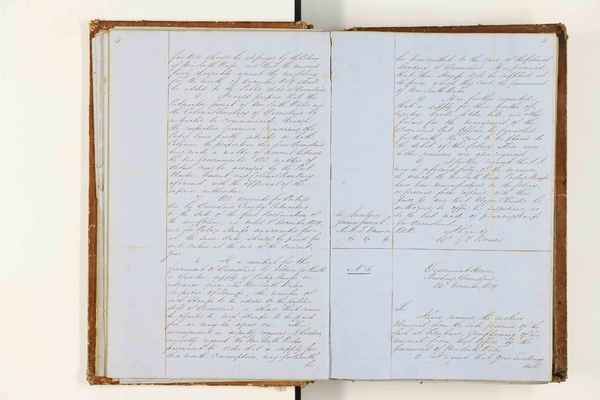 for 1859 should be defrayed by the Colony of New South Wales, and that the amount fairly chargeable against the new colony for the month of December, 1859 should be added to the Public debt of Queensland.

6. I would propose that the Postmaster General of New South Wales and the Colonial Secretary of Queensland be instructed to communicate, through the respective Governors, concering the Postal Lines partly situated in both Colonies, the proportion due from Queensland being made a matter of Account between the two Governments. All matters of detail can be arranged by the Post - Master General, and Colonial Secretary aforesaid, with the approval of the superior authorities.

7. All accounts for Postage due by Queensland country Postmasters to the date of the first Proclamation of the new Colony, i.e. until 1st December, 1859, and for Postage Stamps unaccounted for at the same date, should be paid for and valued at the end of the current year.

8. It is essential for the Government of Queensland to obtain forthwith a Quarter's supply of Postage Stamps in advance from The New South Wales Inspector of Stamps, the number of such stamps to be added to the public debt of Queensland, or, should that course be objected to, such stamps to be paid for as may be agreed on. This arrangement is urgently required. I, therefore, earnestly request the New South Wales Government to order that a supply for three months' consumption, may forthwith be

be transmitted to the care of the Colonial Secretary of Queensland. It is presumed that these Stamps will be supplied at the price which they cost the Governments of New South Wales.

9. It is further requested that a supply for threee months of registry books, letter bills, and other forms for the management of the Queensland Post-Offices, be furnished forthwith; the cost to be placed to the debit of this Colony. Three iron letter receivers are also required.

10. I further request that I may be informed fully of the manner in which the New South Wales Postage Stamps have been manufactured in the Colony, or procured from England; with their price &c. and that Major Christie be authorised to offer his suggestions as to the best mode of procuring stamps for Queensland.

I have received the enclosed Memorial from the late Governor of the Gaol at Brisbane, complaining of his removal from that Office by the Government of New South Wales.

2. I request that Your Excellency will 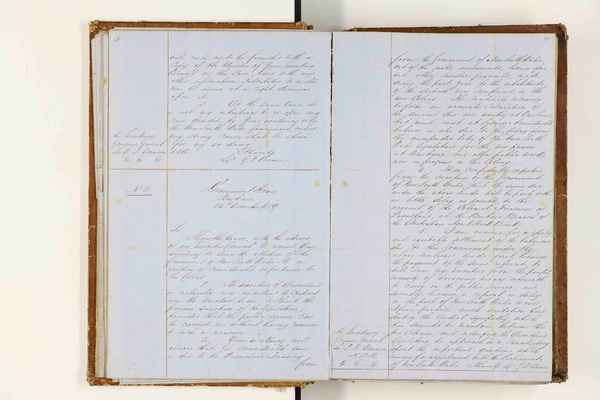 will cause me to be furnished with a Copy of the Minutes of Your Executive Council on this case, and with any other information calculated to enable me to arrive at a right decision upon it.

3. At the same time, it is not my intention to re-open any case decided by Your Excellency or by the New South Wales Government, unless very strong cause shall be shown for my so doing.

I have the honor, with the advice of my Executive council, to request Your Excellency to draw the attention of the Government of New South Wales to a question of considerable importance to this Colony.

2. The Executive of Queensland is naturally very unwilling to contract even the smallest loan, without the previous sanction of the Legislature, provided that the public service can be carried on without having recourse to such a measure.

3. Your Excellency will observe that a considerable sum is due to the Queensland Treasury from

from the Government of New South Wales, out of the rents, assessments, license fees, and other similar payments, made during the past year by the inhabitants of the districts now comprised in the new Colony. The materials necessary to form an accurate calculation of the amount due are wanting at Brisbane, but must exist at Sydney. A considerable balance is also due to this Colony from the unexpended Votes of the New South Wales Legislature for the new prison at Brisbane, and other public works now in progress in this Colony.

4. It is confidently expected from the courtesy of the Government of New South Wales, that the sums due under the above heads will be paid with as little delay as possible, to the account of the Colonial Treasurer of Queensland, at the Brisbane Branch of the Australian Joint Stock Bank.

5. I am anxious for a speedy and equitable settlement of the balances due to this Government under the above-mentioned heads; first, because the payment of the sums referred to will save my Executive from the painful necessity of borrowing money wherewith to carry on the public service; and secondly, because a refusal or delay on the part of New South Wales would, I fear, produce much irritation here, destroy the cordial sympathy which it is desirable to maintain between the two Colonies, and indispose the Queensland Legislature to approach in a concilliatory spirit the important questions which remain for adjustment with the Parliament of New South Wales. 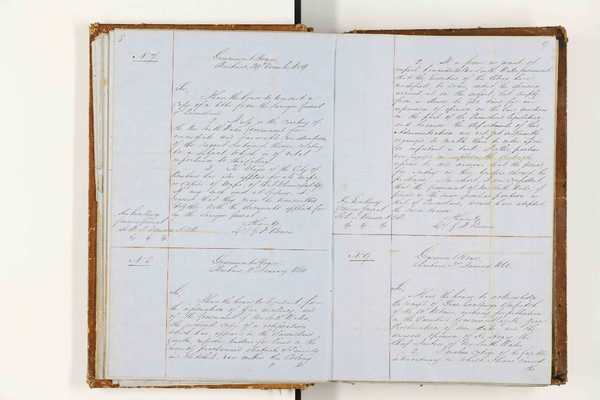 I have the honor to transmit a copy of a letter from the Surveryor-General of Queensland.

2. I rely on the courtesy of the New South Wales Government for immediate and favourable consideration of the request contained therein, relating to a subject which is of vital importance to this Colony.

3. The Mayor of the City of Brisbane has also applied for all maps, or copies of maps, of that Municipality. If any such exist at Sydney, I request that they may be transmitted together with the documents applied for by the Surveyor-General.

I have the honor to transmit, for the information of Your Excellency, and of the Government of New South Wales, the enclosed copy of a notification which has appeared in the Queensland Gazette, respecting tenders for News in the recently proclaimed districts of Kennedy and Mitchell, now within this Colony.

2. It is from no want of respect towards the New South Wales Government that the Executive of this Colony have modified, to some extent, the decision arrived at on this subject; but simply from a desire to give time for an expression of opinion on the land question on the part of the Queensland Legislature; and because the departments of this Administration are not yet sufficiently organised to enable them to enter upon so important a task. Further, parties now engaged in exploring the districts referred to are anxious that the period for sending in their tenders should be prolonged. In short, I am confident that the Government of New South Wales, if placed in the same peculiar position as that of Queensland, would have adopted the same course.

I have the honor to acknowledge the receipt of Your Excellency's despatch of the 20th Ultimo, enclosing for publication in the Queensland Government Gazette, your Proclamation of new date, and the annexed opinion of His Honor the Chief Justice of New South Wales.

2. I enclose copies of the Gazette Extraordinary in which I have caused the