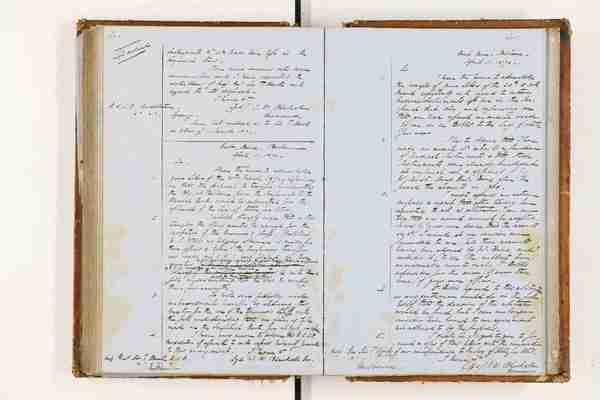 Left margin 300. List enclosed Instruments &c Wm. had been left in the Imperial Stores. There none remained only some ammunition and I have requested the instructions of Mrj. Gnl. Sir T. Chute with regard to its disposal. I have &c (Sgd) S.W. Blackall Governor Left margin J.L.L.S. Middleton &c &c &c Sydney. Same list enclosed as to Sir T. Chute in letter of 10 March 1870. Govt. House. Brisbane April 11. 1870. Sir, I have the honor to acknowledge your letter of the 31st March 1870, informing me that the proposal to transfer permanently the Bks. at Brisbane from the Imperial to the Colonial Govt. would be submitted for the approval of the Leg. of State for War. I would strongly urge that in this transfer the officers quarters be reserved for the occupation of the Governor & staff. Unlike N.S. Wales no lodging allowance is made for these officers & before the temporary transfer was made my A.D.C. was placed in these quarters by permission conveyed to Major Baker, & confirmed by D. A. C. G. Middleton on his visiting Brisbane & with a full understanding that he was to occupy them permanently. It will [?] probably much embarrassment Hearafter by retaining this quarter for the use of the Governor's staff with the full understanding that no claim is to be made on the Imperial Govt. for upkeep or repairs. I have every reason to believe that D.G.C.G. Middleton if referred to will express himself favourable to this arrangement. I have &c Sgd. S.W. Blackall Gov. Left margin Maj. Genl. Sir T. Chute K.C.B. &c &c &c Melbourne.

301 Govt. House. Brisbane. April 11. 1870. Left margin 1. Sir, I have the honor to acknowledge the receipt of your letter of the 24th & 30th March rescpectively with regard to certain medical Instruments left here in the Im-perial Govt. store, and informing me that you had referred an award made by me re Hobbs to the Scy. of State for War. Left margin 2. I beg to observe that I have made an award wh. entails a purchase of Medical Instruments & that these Instruments were already purchased at Imperial cost, & approved of by Sr. Assist. Comy. Gnl. Horne when he passed the account in 1868. Left margin 3. I must express my extreme surprise & regret that after having been requested to act as arbitrator I am now told that my award cannot be accepted. It was by your own desire that the accounts on Wn. I arrived at my decision were forwarded to me, all these accounts having been allowed by Mr. Horne, and I consider it ([to be?] the mildest term) unreasonable now to make Dr. Hobbs responsible for the error if error there were/of your own officer. Left margin 4. Dr. Hobbs agreed to this arbitration as any gentleman would do in the full belief that the decision of the arbitrator would be final, but I can no longer consider him bound to an agreement not adhered to by the protesters. Left margin 5. I shall be obliged to you to for-ward a copy of that when with the remainder of our correspondence to the Secy. of State for War. I have &c (Sgd) S.W. Blackall Governor Left margin Maj. Gen. Sir T. Chute &c &c &c Melbourne. 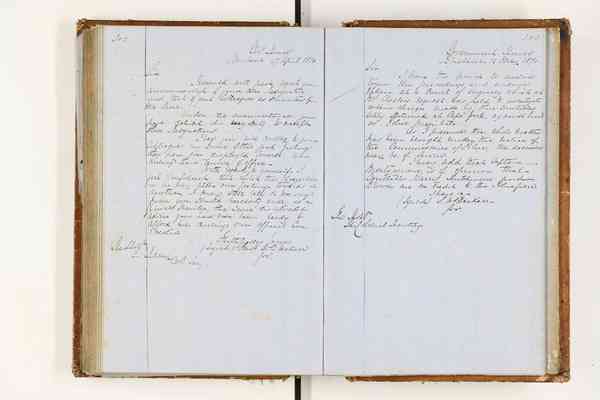 I received with great regret your announcement of your own Resignation and that of your Colleagues as Ministers of the Crown.

Under the circumstances you have detailed, it is my duty to accept these Resignations.

I beg you will convey to your colleagues my [?] of the good feeling they have ever displayed towards me during their tenure of office - With regard to yourself I feel confident that whilst this change will in no way alter our feeling towards one another, I may still rely on receiving from you, should necessity arise, as a private Member, the same disinterested advice you have ever been ready to afford me during our official Con: nection Faithfully yours (signed) [?] [?] Blackall Gov: [Lilly] Col. Secy.

Sir, I have the honor to enclose to you the proceedings and evidence taken at at a Court of Enquiry which at [Mr] [Chester's] request was held to investigate cetain charges made by three Constables lately stationed at Cape York, against him as Police Magistrate. As I presume the whole matter has been broughtg unter the notice of the Commissioner of policye, the docuements may be of service. I may add that Captain [Montgomerie] is of opinion that Constable Barry, Hutchinson and Brown are no credit to the Police force. I have [?] (Signed) S.W. Blackall Gov. [ ] [Holt] The [ ] Secretary 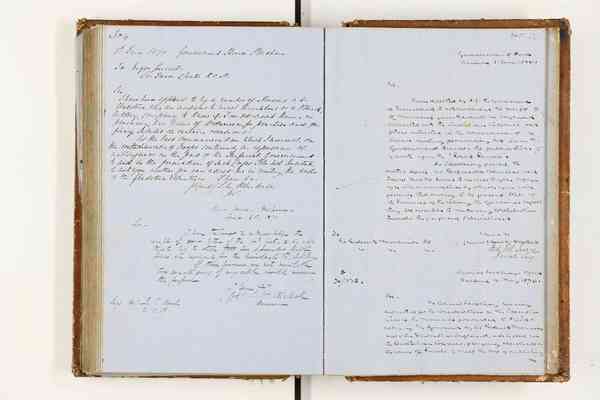 I have been applied to by a number of Persons at Gladstone who are enxious to enrol themselves as a Volunteer Artillery Company to know if I could assist them in procuring two pieces of Ordnance for practise and for firing salutes on certain occasions.

As the last communication which I received, on the withdrawal of Troops contained an impression of willingness on the part of the Imperial Government to aid in the formation of such Corps I do not hesitate to ask you whether you can attest me inciting the wishes of the Gladstone Volunteers.

I have the honor to acknowledge the receipt of your letter of the 14th inst. & in reply there to state that two 6 pounder field pieces are required for the Queensland Vol. Artillery.

If these however are not available two small guns of any calibre would answer the purpose.

I am directed by H.G. the Governor of Queensland to acknowledge the receipt of the memorial from Residents in England connected with the Australian Colonies and others interested in the advancement of Science inviting pecurring aid from this Government towards the publication of a work upon the "Fossil Fauna".

His Excellency placed the matter before his Responsible Advisers and I now have the honor to enclose to you copy of a communication by which you will perceive that owing to the present state of the Finances of the Colony the Governor regrets they are unable to make any contribution towards the proposed publication.

Colonial Secretary's Office Brisbane, 19 May 1870. Sir, The Colonial Secretary having submitted for the consideration of the Executive Council the memorial forwarded to His Ex'cellency The Governor by Sir Roderick Murchison and other Residents in England, interested in the Australian Colonies, praying assistance in the way of Funds to meet the cost of publishing a

Last edit 8 months ago by maltesemaur 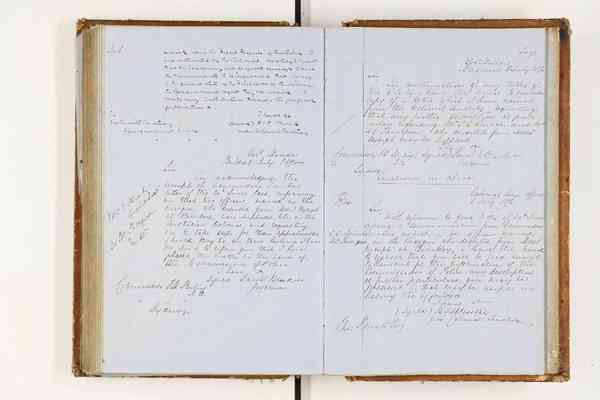 To The Private Secretary Government House.

to work upon the "Fossil Fauna" of Australia. I am instructed by the Colonial Secretary to request that His Excellency will be good enough to cause the memorialists to be informed that owning to the present state of the Finances of the Colony the Government regret they are unable to make any contribution towards the proposed publication.

I have &c (signed) H. H. Massie Under Colonial Secretary

In acknowledging the receipt of Commodore Lambert's letter of the 20th June last, informing me that two officers, named in the margin, who deserted from HMS "Nymph" at Bombay, were supposed to be in the Australian Colonies and requesting me to take steps for their apprehension, should they be in this Colony, I have the honor to inform you that I have placed the matter in the hands of the Commissioner of Police.

In continuation of my letter of 4th July I have the honor to enclose copy of a letter which I have received from the Colonial Secretary requesting that any further description or particulars regarding Mr. C. C. Stuart, and Mr. H.E. Thompson, who deserted from HMS "Nymph" may be supplied.

With reference to your letter of 29th. June covering a communication from Commodore Lambert respecting two Officers named in the margin who deserted from HMS "Nymph" at Bombay, I have the honor to request that you will be good enough to transmit for me information of the Commissioner of Police any description or further particulars you may be possessed of that may be useful in tracing the Offenders.

I have &c (signed) [?] for Colonial Secretary

Last edit 8 months ago by MMcKL 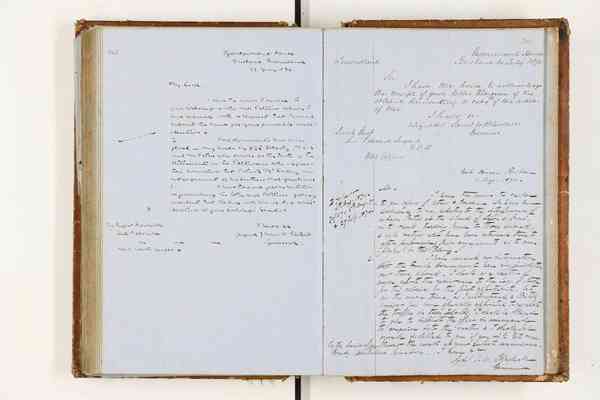 I have the honor to enclose to your Lordship a letter and Petition which I have received, with a request that I would submit the same for your favorable consi-deration.

2. These documents have been placed in my hands by Dr O'Doherty, M.C.G. and Mr Petrie who vouch for the truth of the statements in the Petitioners who express their conviction that Patrick McKinley was not cognisant of his brother's mal-practices.

3. I have therefore felt no hesitation in forwarding the letter and Petition, feeling confident at your Lordship's hands.

I have the honor to acknowledge the receipt of your letter ws distribution 36. of the 23 April transmitting a copy of the articles of War.

I have the honor to enclose

1. to you copies of lettrs & Evidence wn. have been addressed to me, relative to the interference of certain Parties at the islands of Lifou & Mare, with vessels trading hence to more islands, & with natives who have been returned thereto after performing their engagements with em-ployers in this Colony.

2. I have received no intimation that the French Government have any jurisdiction over their islands. I shall as a matter of course report the occurrence to the Secy. of State for the colinies by the first opportunity, but in the mean time, as I understand a British cruiser has been specially appointed to regulate the traffic in these Islands. I shall be obliged to you to instruct the officer in command to enquire into the matter & I shall feel much indebted to you if you will let me know the result at your earliest convenience.