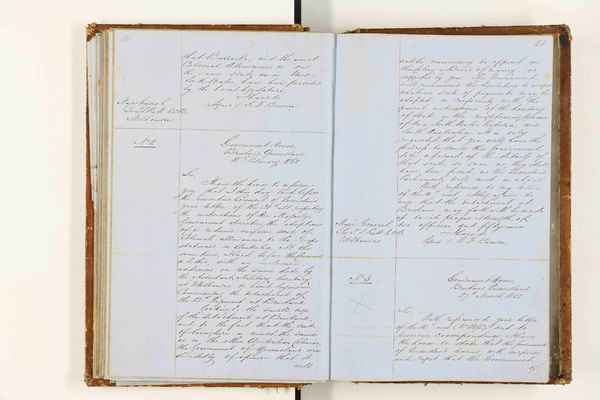 that Barracks, and the usual Colonial Allowances to. on the same scale as in New South Wales, have been provided by the local Legislature. I have to. Signed G.F. Bowen

Sir, I have the honor to inform you that I this day laid before the Executive Council of Queensland your letter of the 30th ult., respecting the instructions of Her Majesty's Government directing the adoption of a reduced uniform scale of Colonial allowances to the Troops stationed in Australia. At the same time, I laid before the Council a letter, with an enclosure, addressed on the same date by the Assistant Military Secretary at Melbourne to Lieut. Seymour, Commanding the detachment of the 12th Regiment at Brisbane. Looking to the small size of the detachment at Brisbane, and to the fact that the cost of living here is much the same as in the other Australian Colonies, the Government of Queensland are decidely of opinion that it will

will be unnecessary to appoint in this Colony a Board of Enquiry, as suggested by you. The Government will recommend the Legislature to adopt whatever scale of payment may be adopted, in conformity with the general instructions of the Secretary of State, in the neighbouring Colonies of New South Wales, Victoria, and South Australia. It is only requested that you will have the goodness to cause this Government to be informed of the details of that scale, so soon as they shall have been fixed, as the Queensland Parliament will meet in April. With reference to my letter of the 4th inst. I beg again to urge that the detachment at Brisbane may forthwith be made up to its proper strength of two officers and fifty men. I have to. Signed / G. F. Bowen. 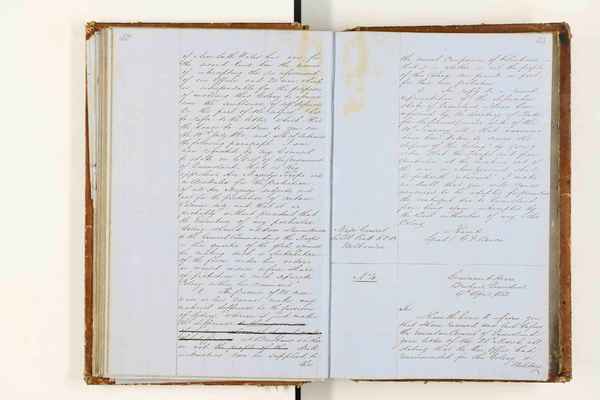 second column of New South Wales has now, for the second time, been the means of intercepting the re-inforcement of one Officer and 25 men, which is indispensable for the purpose of enabling this Colony to assume even the semblance of self defence. On this part of the subject, I beg to refer to the letter which I had the honor to address to you on the 16th July 1860; and which contained the following paragraph: "I am now requested by my Council of state, on behalf of the Government of Queensland, that, as they apprehend, Her Majesty's Troops are in Australia for the protection of all Her Majesty's subjects, and not for the protection of certain Colonies only; and that it is probably without precedent that the Executive of any particular Colony should address a remonstrance to the General commanding the Troops in this quarter of the globe, against his making such a distribution of the force under his orders as would ensure a fair share of protection to each separate Colony within his command." 2. The presence of 25 men more or less cannot make any material difference to the Garrison of Sydney, whereas it just makes the difference (crossed out words - to the garrison of Sydney, whereas it just makes the difference) at Brisbane whether or not (crossed out words - the people of this) drillinstructors can be supplied to the

the several Companies of Volunteers;- that is - whether or not the people of this Colony can provide in part for their own protection. 3. In reply to a recent representation of the defenceless state of Queensland, I have been informed by the Secretary of State for the the Colonies (under date of the 20th January ult.,) that "measures have been taken to secure the defence of this Colony" by giving orders "that the Troops sent from Australia at the breaking out of the war in New Zealand shall be forthwith returned." I make no doubt that you will cause measures to be adopted for preventing the contingent due to Queensland from being again intercepted by the Civil authorities of any other Colony. I have to. Signed / G.F. Bowen.

Sir, I have the honor to inform you that I have received and laid before the Executive Council of Queensland your letter of the 26th March, ult., stating that the War Office had recommended for this Colonya Military 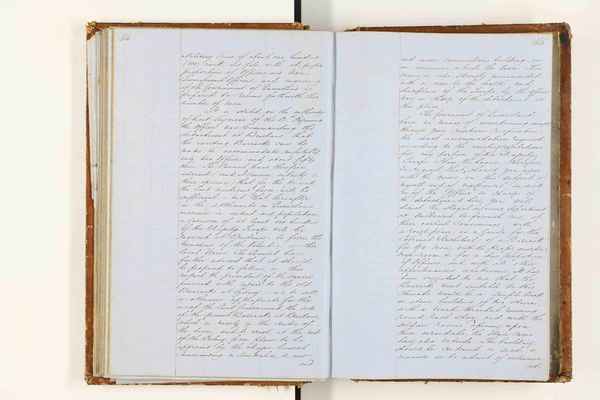 84 Military Force of about one hundred (100) rank and file, with its proper proportion of Officers and Non - Commissioned Officers; and enquiring if the Government of Queensland is prepared to receive forthwith this number of men.

It is stated on the authority of Lieut. Seymour of the 12th Regiment the Officer now Commanding the detachment at Brisbane, that the existing Barracks can be made to accommodate comfortably only two Officers and about fifty men. The Council have, therefore, advised (and I concur entirely in their opinion,) that, for the present, the last mentioned force will be sufficient; - but that, hereafter, as the settlements in Queensland increase in extent and population, a Garrison of at least one hundred of Her Majesty's Troops will be required at Brisbane - to form the neucleus of the Volunteer, or other local Forces. The Council have further advised that it should be proposed to follow in this respect, the precedent of the course pursued with regard to the old Barracks at Sydney - i.e. to sell, or otherwise appropriate for the use of the Civil Government, the site of the present Barracks at Brisbane, which is nearly in the centre of the town, and to erect, at the cost of the Colony, from plans to be approved by the Major - General Commanding in Australia, a new and

85 and more commodious building on an eminence outside the town. This course is also strongly recommended, with a view to the health and discipline of the Troops, by the Officer now in charge of the detachment at this place.

The Government of Queensland have no means of ascertaining, except through your courteous Co-operation, the exact accommodation required, according to the existing regulations for any portion of Her Majesty's Troops. I have the honor, therefore, to request that, should you agree with the views on this subject of myself and of my Council, as well as of the Officer in charge of the detachment here, you will direct the Royal Engineer department at Melbourne to furnish me, at their earliest convenience, with a rough plan (as a guide for the Colonial Architect) of a Barrack for 100 men with the proper quarters, mess-room & for a due proportion of Officers, and with all other appurtenances whatsoever. It has been suggested to me that the Barracks most suitable to this climate would be a simple brick or stone building of two stories, with a broad verandah running round each story, and with the soldiers' rooms opening upon these verandahs, the stair-cases being also outside. The buildings should be contrived in such a manner as to admit of extension at 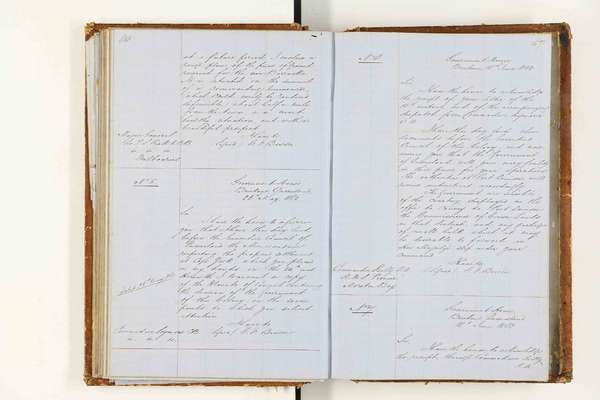 at a future period. I enclose a rough plan of the piece of ground reserved for the new Barracks. It is situated on the summit of a commanding eminence, (which could easily be rendered defensible,) about half. a. mile from the town, in a most healthy situation, and with a beautiful prospect.

I have the honor to inform you that I have this day laid before the Executive Council of Queensland the Memorandum respecting the proposed settlement at Cape York, which you placed in my hands on the 24th inst. Herewith I transmit a copy of the Minute of Council containing the decision of the Government of this Colony on the seven points to which you solicit attention.

I have the honor to acknowledge the receipt of you letter of the 16th instant, and of the accompanying dispatch from Commodore Seymour C.B.

I have this day laid these documents before the Executive Council of this Colony, and now assure you that the Government of Queensland will give every facility in their power for your operations. The authorities at Port Denison will receive instructions accordingly.

The Government are sensible of the courtesy displayed in the offer to convey to Port Denison the Commissioner of Crown Lands in that district, and any packages of small bulk which it may be desirable to forward in Her Majesty's ship under your command.

I have the honor to acknowledge the receipt, through Commodore Reilly R.M. 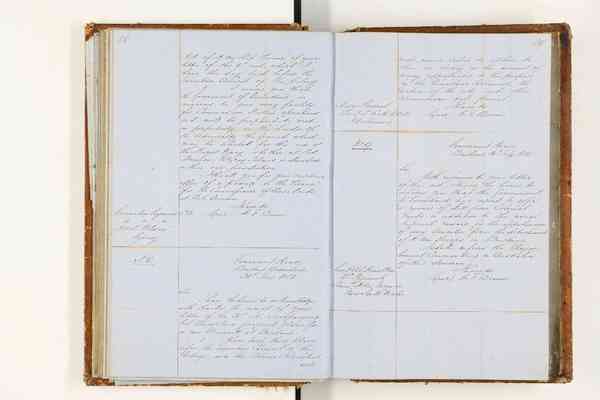 R.M. of H.M's Ship "Pioneer", of your letter of the 9th inst., which I have this day laid before the Executive Council of this Colony.

2. I assure you that the Government of Queensland is anxious to give every facility for Commodore Reilly's operations; and will be prepared to vest in perpetuity in the Lords of the Admiralty the ground which may be selected for the use of the Royal Navy, whether at Port Denison, Fitzroy Island, or elsewhere, within our jurisdiction.

I thank you for your courteous offer of a passage in the "Pioneer" for the Commisioner of Crown Lands at Port Denison.

I have the honor to acknowledge with thanks the receipt of your letter of the 31st ult., accompanying Col. Broughton's proposed plans for a new Barrack at Brisbane.

2. I have laid these plans before the Executive Council of this Colony; and the Colonial Architect will

will receive orders to adhere to them as closely as the amount of money appropriated to this purpose, by the Queensland Parliament, the nature of the site, and other circumstances will permit.

With reference to your letter of the - inst. I have the honor to inform you that the Government of Queensland has agreed to offer a reward of £10 from Colonial Funds, in addition to the usual Imperial reward, for the apprehension of every Deserter from the detachment of H.Ms' Troops in Brisbane.

I shall inform the MajorGeneral Commanding in Australia of this decision. I have &c. (Signed) G.F. Bowen