These papers contain the memoirs of J.H Gill, a Lieutenant-Commander of the Royal Australian Navy. He writes of his time in the Navy, from when he joined the South Australian Naval Reserve in July 1898 until 1943 when he finally retired and became a ferry-boat master, still enjoying life on the sea. Throughout his memoirs, he talks of the different voyages he made in his career; travelling between Australia and the UK, the different ships he had sailed on such as the H.M.S Psyche and the experiences he had while being a part of the Navy. He also mentions the different jobs he had to perform while in the Navy including in times of war and his promotions during his career. These memoirs present a way to connect with the history of Adelaide and its international neighbours; providing a chance to learn about the experiences of naval officers and their career during the early 20th century. 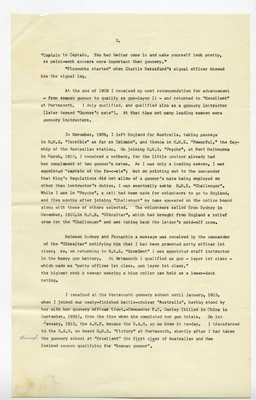