A diary written by E. Holland about his voyage to Australia with his wife. Beginning on September 11 1875, he writes of his travelling experiences which started at Oxford before travelling to Plymouth to go through the Emigrants Depot, and then heading on-board the the 'Robert Lees' to finally travel to Australia. Each daily entry shows one or two sentences, usually talking about the main event of that day. He writes about his experiences on board as well as the activities he participated in and the people he and his wife met. He also talks about the difficulties as the weather turned for worse in some cases with both he and his wife getting sick during the journey. The diary was presented to the Nautical Museum, Port Adelaide, by Ida Holland in memory of her parents Mr. & Mrs. E.Holland on July 29th., 1944. 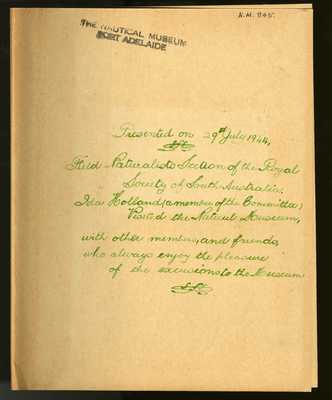 over 1 year agoMLH wrote refer page 11
over 1 year agoAlannaM wrote I think there should be another page of writing after this - it ends mid sentence. May be mistake...
Show More