The diary, written in a reporter style notebook, contains entries written by 'Tubby' Waples while serving on board HMAS KALGOORLIE during the Pacific campaign of World War Two. Waples writes of the general activities that occurred during the trip talking about the weather, the duties he performed while on board, the food and drinks he consumed and the company he lived with during his time on the ship. He also includes the names of other ships that kept in company with his ship as they played games and had swimming parties with the other crew member from both KALGOORLIE and other boats. 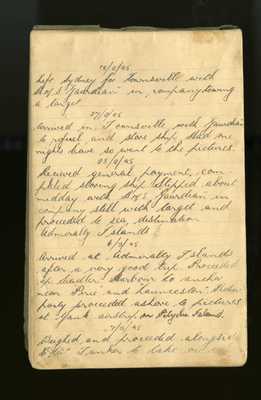