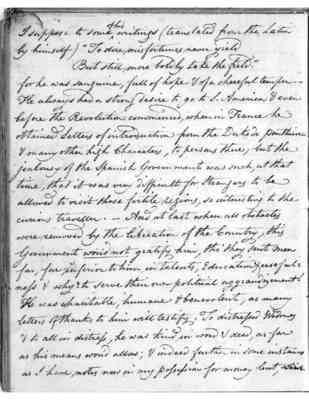 I suppose to some of his writings( translated from the Latin by himself) "To dire misfortunes never yield But still more boldly take the field." for he was sanguine, full of hope and of a cheerful temper. He always had a strong desire to to to S. America and even before the Revolution commenced, when in France he obtained Letters of introduction from the Duke de Ponthieu and many other high Characters, to persons there; but the jealousy of the Spanish Government was such, at that time, that it was very difficult for Strangers to be allowed to visit those fertile regions, so interesting to the curious traveller.--And at last when all obstacles were removed by the liberation of the Country, this Government would not gratify him, tho' they sent men far, far inferior to him, in talents, Education, usefulness and why? to serve their own political aggrandizement! He was charitable, humane and benevolent, as many letters of thanks to him will testify. To distressed { ? } and to all in distress, he was kind in word and deed, as far as his means would allow; and indeed further in some instances as I have notes now in my possession for money lent, 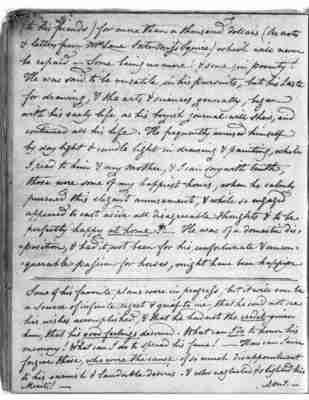 (to his friends) for more than a thousand dollars (see notes and letters from Mrs Lane late Miss Squire) which will never be repaid --Some being no more! and some in poverty! He was said to be versatile in his pursuits, but his taste for drawing, and the arts and sciences genually began with his early life, as his boyish journal will show, and continued all his life. He frequently amused himself by daylight and candle light in drawing and painting, while I read to him and my mother, and I can say with truth, those were some of my happiest hours, when he calmly pursued this elegant amusement, and while so engaged appeared to cast aside all disagreeable thoughts and to be perfectly happy at home. He was of a domestic disposition, and had it not been for his unfortunate and unconquerable passion for horses, might have been happier -----------------------------------------------------------------------------------Some of his favorite plans were in progress, but it will ever be a source of infinite regret and grief to me, that he could not see his wishes accomplished, and that he had not the credit given him, that his good feelings deserved. What can I do to honor his memory! What can I do to spread his fame! How can I ever forgive those, who were the cause of so much disappointment to his earnest and laudable desires--I who neglected delighted his Merits! sent.- 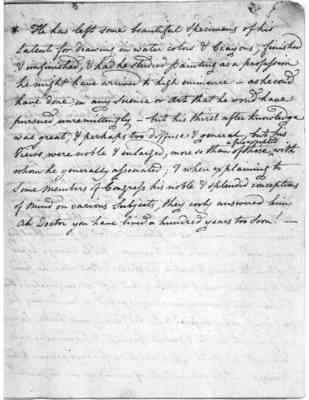 * He has left some beautiful Specimans of his talents for drawing in water colors and crayons, finished and unfinished, and had he studied painting as a profession he might have arrived to high eminence--as he could have done in any Science or Art that he would have pursued unremittingly--but his thirst after knowledge was great and perhaps too diffuse and general, but his views were noble and enlarged, more so than of those, a few excepted,with whom he generally associated; and when explaining to some members of Congress his noble and splendid conceptions of mind on various Subjects, they cooly answered him Ah Doctor you have lived a hundred years too Soon! 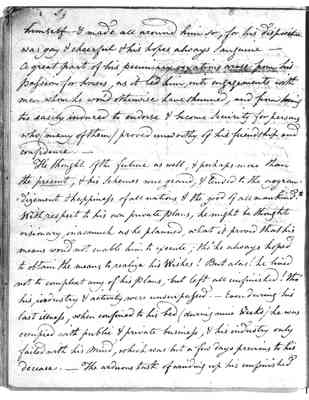 himself and made all around him so, for his disposition was gay and cheerful and his hopes always sanguine-A great part of his pecuniary vexations arose from his passion for horses, as it led him into engagements with men whom he would otherwise have shunned, and from being too easily induced to endorse and become Security for persons who many of them proved unworthy of his friendship and confidence. He thought of the future as well, and perhaps more than the present, and his schemes were geared, and tended to the aggrandizement and happiness of all nations and the good of all mankind. * With respect to his own private plans, he might be thought visionary inasmuch as he planned, what it proved that his means would not enable him to execute; tho' he always hoped to obtain the means to realize his Wishes! But alas! he lived not to compleat any of his plans, but left all unfinished! tho' his industry and activity were unsurpassed. Even during his last illness, when confined to his bed (during nine weeks) he was occupied with public and private business, and his industry only failed with his mind, which was but a few days previous to his decease. The arduous task of winding up his unfinished 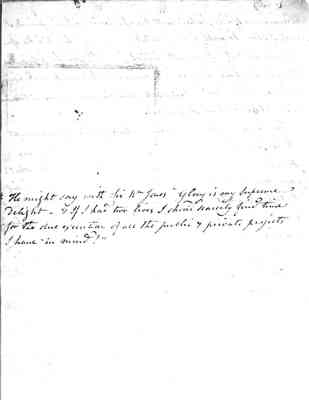 * He might say with Sir Wm Jones "Glory is my Supreme Delight-- and if I had two lives I should scarcely find time for the due execution of all the public and private projects I have in mind!"