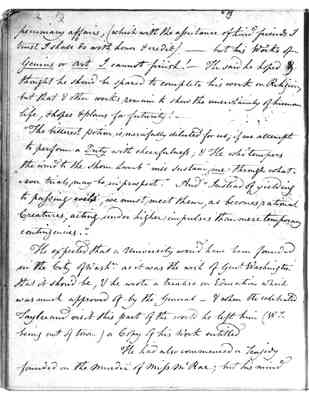 pecuniary affairs, (which with the assistance of kind friends I trust I shall do with honor and credit) but his Works of Genius or Art I cannot finish! He said he hoped and thought he should be spared to complete his work on Religion, but that and other works remain to show the uncertainty of human Life, and hopes and plans for futurity! "The bitterest portion, is mercifully diluted for us; if we attempt to perform a Duty with cheerfulness; and He who tempers the wind to the shorn Lamb "will sustain me through whatever trials may be in prospect" And "Instead of yielding to passing evils, we must meet them, as becomes rational Creatures, acting under higher impulses than mere temporary contingencies." He expected that a University would have been founded in the City of Wash, as it was the wish of Geo. Washington thus it should be, and he wrote a treatise on Education which was much approved of by the General--and when the celebrated {Saylerand?} visit this part of the world he left him (W. being out of town) a copy of his work entitled He had also commenced a Tragedy founded on the murder of Miss McRae, but his mind 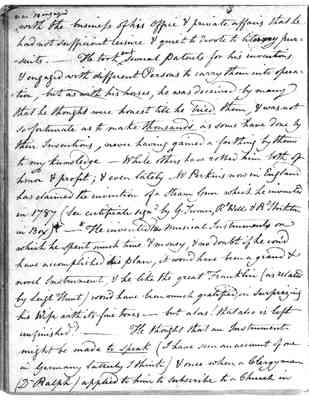 was so engaged with the business of his office and private affairs that he had not sufficient leisure and quiet to devote to literary pursuits. He took out several patents for his inventions and engaged with different Persons to carry them into operation, but as with his horses, he was deceived by many that he thought were honest till he tried them, and was not so fortunate as to make thousands as some have done by their Inventions, never having gained a farthing by them to my knowledge--while others have robbed him both of honor and profit; and even lately Mr Perkins now in England has claimed the invention of a steam gun which he invented in 1787 (See certificate signed by G. Turner, R Wells and R {Shockton?} in Box )--*He invented two musical instruments on which he spent much time and money, and no doubt if he could have accomplished his plan, it could have been a grand and novel instrument, and he like the great Franklin (as related by Leigh Hunt) would have been much gratified in surprizing his wife with its fine tunes--but alas! that also is left unfinished! He thought that an Instrument might be made to speak (I have seen an account of one in Germany latterly I think) and once when a Clergyman (D. Ralph) applied to him to subscribe to a Church in 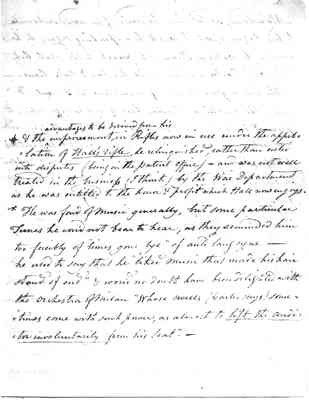 * and the advantages to be derived from his improvement, in Rifles now in use under the appellation of Hall's Life, he relinquished rather than{ enter} with disputes (being in the patent office)--and was not well treated in the business (I think by the War Department as he was entitled to the honor and profit which Hall now enjoys. * He was fond of Music generally, but some particular Tunes he could not bear to hear, as they reminded him too forcibly of" times gone bye" of auld lang syne-he used to say that he "liked music that made his hair stand of end" and would no doubt have been delighted with the Orchestra of Milan "whose swells, (Carter says) sometimes come with such power, as almost to lift the auditor involuntarily from his seat." 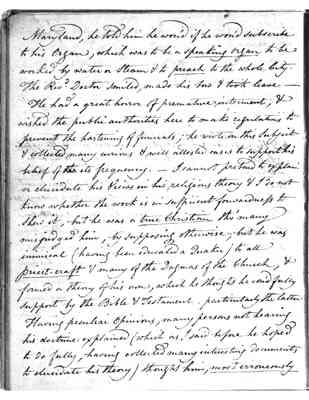 Maryland, he told him he would if he would subscribe to his Organ, which was to be a speaking organ to be worked by water or Steam and to preach to the whole City. The Rev. Doctor smiled, made his bow and took leave. He had a great horror of premature interment, and wished the public authorities here to make regulations to prevent the hastening of funerals; he wrote on this subject and collected many curious and well attested cases to support his belief of its frequency. I cannot pretend to explain or elucidate his views in his religious theory and I do not know whether the work is in sufficient forwardness to show it, but he was a true Christian tho' many misjudged him, by supposing otherwise; but he was inimical (having been educated a Quaker) to all priest -craft and many of the Dogmas of the Church, and formed a theory of his own, which he thought he could fully support by the Bible and Testament--particularly the latter. Having peculiar opinions, many persons not hearing his doctrine explained (which as I said before he hoped to do fully, having collected many interesting documents to elucidate his theory) thought him, most erroneously 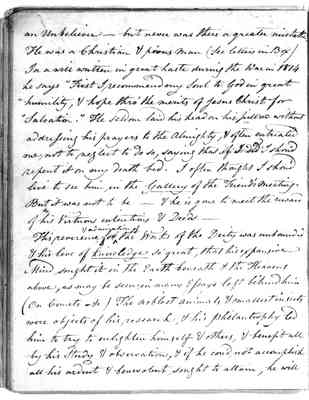 an Unbeliever--but never was there a greater mistake. He was a Christian and pious man (see letters in Box) In a will written in great haste during the War in 1814 he says "First I recommenced my Soul to God in great humility and hope thro' the merits of Jesus Christ for Salvation." He seldom laid his head on his pillow without addressing his prayers to the Almighty, and often entreated me, not to neglect do to so, saying that if I did I should repent it on my death bed. I often thought I should live to see him in the Gallery of the Friends' Meeting. But it was not to be--and he is gone to meet the reward of his Virtuous intentions and Deeds. This reverence and admiration for the Works of the Deity was unbounded and his love of knowledge so great, that his expansive Mind sought it in the Earth beneath and the Heavens above, as may be seen in many essays left behind him (On Comets to) The noblest animals and smallest insects were objects of his research, and his philantrophy led him to try to enlighten himself and others, and benefit all by his Study and observation, and if he could not accomplish all his ardent and benevolent sought to attain, he will