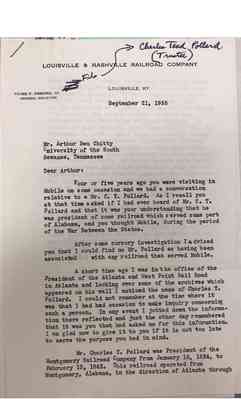 Dear Arthur: Four or five years ago you were visiting in Mobile on some occasion and we had a conversation relative to a Mr. C. T. Pollard. As I recall you at that time asked if I had ever heard of Mr. C. T. Pollard and that it was your understanding that he was president of some railroad which served some part of Alabama, and you thought Mobile, during the period of the War Between the States.

After some cursory investigation I advised that I could find no Mr. Pollard as having been associated with any railroad that served Mobile.

A short time ago I was in the office of the President of the Atlanta and West Point Rail Road in Atlanta and looking over some of the archives which appeared on his wall I noticed the name of Charles T. Pollard. I could not remember at the time where it was that I had had occasion to make inquiry concerning such a person. In any event I jotted down the information there reflected and just the other day remembered that it was you that had asked me for this information. I am glad now to give it to you if it is not too late to serve the purpose you had in mind.

Mr. Charles T. Pollard was President of the Montgomery Railroad Company from January 15, 1835, to February 13, 1843. This railroad operated from Montgomery, Alabama, in the direction of Atlanta through 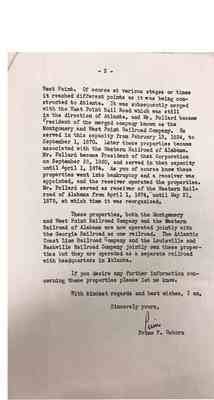 West Point. Of course at various stages or times it reached different points as it was being constructed to Atlanta. It was subsequently merged with the West Point Rail Road which was still in the direction of Atlanta, and Mr. Pollard became President of the merged company known as the Montgomery and West Point Railroad Company. He served in this capacity from February 13, 1834, to September 1, 1870. Later these properties became associated with the Western Railroad of Alabama. Mr. Pollard became President of that Corporation on September 28, 1860, and served in that capacity until April 1, 1874. As you of course know these properties went into bankruptcy and a receiver was appointed, and the receiver operated the properties. Mr. Pollard served as receiver of the Western Railroad of Alabama from April 1, 1874, until May 31, 1875, at which time it was reorganized.

If you desire any further information concerning these properties please let me know.

With kindest regards and best wishes, I am, Sincerely yours, Prime F. Osborn