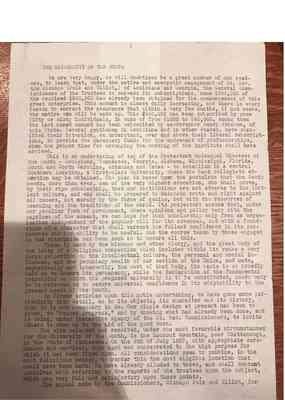 THE UNIVERSITY OF THE SOUTH

We are very happy, as will doubtless be a great number of our readers, to learn that, under the active and energetic management of Rt. Rev. the Bishops (Polk and Elliot,) of Louisiana and Georgia, the General Commissioners of the Trustees to canvass for subscriptions, some $340,000 of the required $500,000 has already been obtained for the commencement of this great enterprise. This amount is almost daily increasing, and there is every reason to warrant the assurance that within a very few months, if not weeks, the entire sum will be made up. This $340,000 has been subscribed by some fifty or sixty individuals, in sums of from $1000 to $40,000, among them the last named amount has been subscribed by ex-Governor Henry Johnson, of this State. Several gentlemen in Louisiana and in other States, have signified their intention, we understand, over and above their liberal subscriptions, to provide the necessary funds for the endowment of professorships, when the proper time for arranging the working of the institute shall have arrived.

This is an undertaking of ten of the Protestant Episcopal Dioceses of the South -- Louisiana, Tennessee, Georgia, Alabama, Mississippi, Florida, South and North Carolina, Arkansas and Texas -- to establish in a central Southern location, a first-class University, where the best collegiate education may be obtained. The plan is based upon the postulate that the South needs, more than ever, men of the very highest education, who shall prove, by their ripe scholarship, that our institutions are not adverse to the loftiest culture, and who shall be prepared to maintain truth and right against all comers, not merely by the force of genius, but with the resources of learning and the traditions of the world. Its projectors assume that, under our peculiar form of government, where opinions and policy vary with the caprices of the moment, we can hope for such scholarship only from an organization independent of the popular will for its revenues, and with a foundation of a character that shall warrant the fullest confidence in its permanence and its ability to be useful. And the course taken by those engaged in the enterprise has been such as to secure all this.

Taken in hand by the bishops and other clergy, and the great body of the laity of a religious connection which includes within its ranks a very large proportion of the intellectual culture, their personal and social influence, and the pecuniary wealth of our section of the Union, and made, emphatically and inherently, the work of that body, its basis is so broadly laid as to insure its permanency, while the declaration of the fundamental principles on which the proposed university is to be consituted, needs only to be referred to to secure universal confidence in its adaptability to the present needs of the South.

In former articles upon this noble undertaking, we have gone more particularly into detail, as to its objects, its character and its history, than it is now necessary to do. Our single design at present has been to speak, to "report progress," and by showing what has already been done, and is doing, under thecactive agency of the Rt. Rev. Commissioners, to incite others to come up to the aid of the good work.

The site selected and received, under the most favorable circumstances for the University of the South, is the Lookout Mountain, near Chattanooga, in the State of Tennessee. On the 4th of July 1857, with appropriate ceremonies and services, this spot was consecrated to the high purpose for which it had been fixed upon. All considerations seem to combine, in the most felicitous manner, to render this the most eligible location that could have been made. We have already alluded to thses, and shall content ourselves with referring to the reports of the trustees upon the subject, which are very full and satisfactory upon these points.

The appeal made by the Commissioners, Bishops Polk and Elliot, for 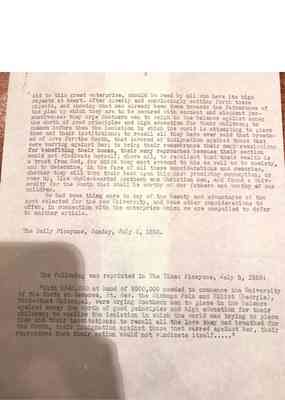 aid to this great enterprise, should be read by all who have its high objects at heart. After clearly and convincingly setting forth these objects, and showing what has already been done towards the futherance of the plan by which they are to be secured with earnest and eloquent persuasiveness they urge Southern men to weigh in the balance against money the worth of good principles and high education for their children; to summon before them the isolation in which the world is attempting to place them and their institutions; to recall all they have ever said that breathed of love for the South, that savored of indignation against those that were warring against her; to bring their remembrance their many resolutions for benefiting their homes, their many reproaches because their section would not vindicate herself' above all, to recollect that their wealth is a trust from God, for which they must avvound to him as well as to society, and to determine, in the face of all these considerations and memories, whether they will turn their back upon this most promising conception, or come up, like whole-hearted Southern and Christian men, and found a University for the South that shall be worthy of our fathers and worthy of our children.

We had some thing more to say of the beauty and advantages of the spot selected for the new University, and some other considerations to offer, in connection with the enterprise which we are compelled to defer to another article.

"With $340,000 at hand of $500,000 needed to commence the University of the South at Sewanee, Rt. Rev. the Bishops Polk and Elliot (Georgia), Protestant Episcopal, were urging Southern men to place in the balance against money the worth of good peinciples and high education for their children; to realize the isolation in which the world was trying to place them and their institutions; to recall all the love they had breathed for the South, their indignation against those that warred against her, their reproaches that their action would not vindicate itself....."

Last edit 10 months ago by Lane Oliver
All 2 records