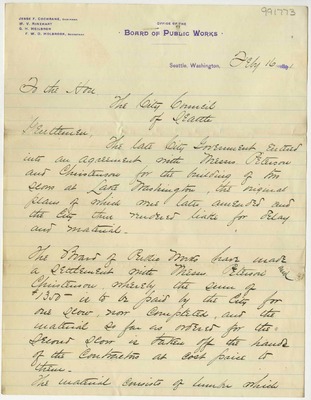 [Letterhead centered on page:] OFFICE OF THE BOARD OF PUBLIC WORKS

To the Hon. The City Council of Seattle

The late City Government entered into an agreement with Messrs. Peterson and Christenson for the building of two scows at Lake Washington, the original plans of which were later amended and the City thus rendered liable for delay and material.

The Board of Public Works have made a settlement with Messrs. Peterson and Christenson, whereby the sum of #1350- is to be paid by the City for one scow, now completed, and the material so far as ordered for the second scow is taken off the hands of the contrators at cost price to them.

The material consists of lumber which 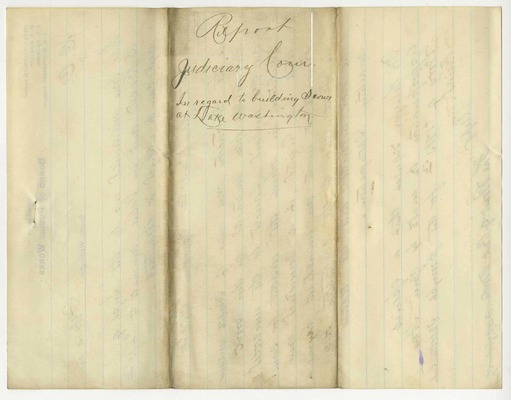 In regard to building Scows at Lake Washington. 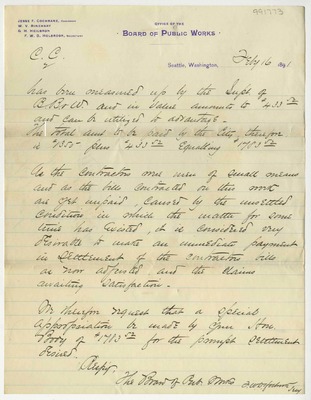 [Letterhead centered on page:] OFFICE OF THE BOARD OF PUBLIC WORKS

As the contractors are men of small means and as the bills contracted on this work are yet unpaid, caused by the unsettled condition in which the matter for some time has existed, it is considered very desirable to make an immediate payment in settlement of the contractors bills as now adjusted, and the claims awaiting satisfaction.

We therefore request that a special appropriation be made by your Hon. Body of $1783.52 for the prompt settlement desired.

The Board of Pub. Works F. W. D. Holbrook Secy 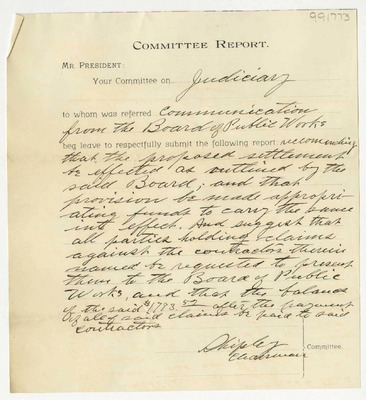 Your committee on Judiciary to whom was referred Communication from the Board of Public Works beg leave to respectfully submit the following report: recommending that the proposed settlement be effected as outlined by the said Board; and that provision be made appropriating funds to carry the same into effect. And suggest that all parties holding claims against the contractors therein named be requested to present them to the Board of Public Works, and that the balance of the said $1783.52 after the payment of all of said claims be paid to said contractors.

Last edit 8 months ago by Stevie
Displaying all 4 pages