ReadAboutContentsHelp
A complaint was filed saying that there were too many street vendors in the City. The License Collector suggested that they could be abated by not granting any more licenses. See full description in Digital Collections 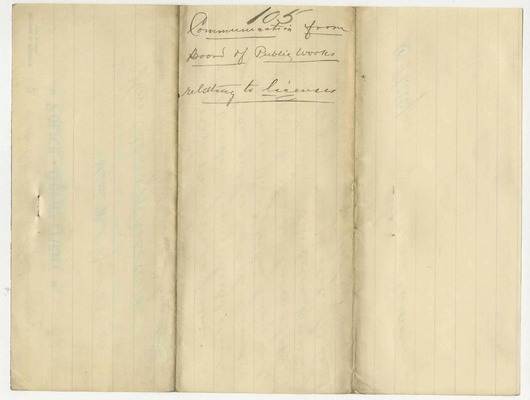 105 Communication from Board of Public Works relating to licenses

Last edit 7 months ago by Harpwench 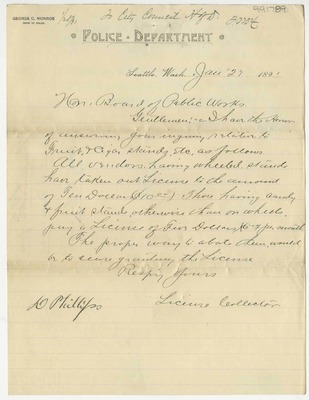 Hon. Board of Public Works

Gentlemen: I have the honor of answering your inquiry reative to fruit & cigar stands, etc. as follows.

All vendors having wheeled stands have taken out License to the amount of Ten Dollars ($10.00). Those having candy & fruit stands otherwise than on wheels pay a License of Five Dollars ($5.00) per month.

The proper way to abate them would be to cease granting the license.

Last edit 14 days ago by Stevie 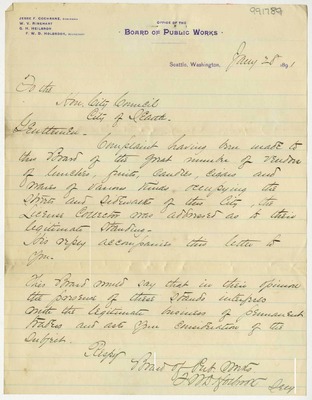 OFFICE OF THE Board of Public Works

To the Hon. City Council City of Seattle

Complaint having been made to the Board of the great number of vendors of lunches, fruits, candies, cigars and [meals?] of various kinds occupying the streets and sidewalks of this city, the License Collector was addressed as to their legitimate standing.

His reply accompanies this letter to you.

The Board would say that in their opinion the proceeds of these stands interferes with the legitimate business of permanent stores and asks your consideration of the subject.

Last edit 14 days ago by Stevie
Displaying all 3 pages