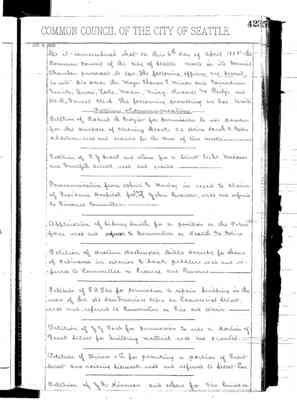 423 COMMON COUNCIL OF THE CITY OF SEATTLE Apr 6 1888 Be it remembered that on this 6th day of April 1888 the Common Council of the City of Seattle meets in its Council Chamber pursuant to law. The following officers are present, to wit'. His Honor the Mayor Thomas T. Minor and Councilmen Frink, Green, Lake, Moran, Niesz, Russell and Reitze and W R Forrest Clerk. The following proceedings are had, to wit: Petitions & Communications Petition of Robert B Crozier for permission to use powder for the purpose of cleaning Block 22 Heirs Sarah A.Bella addition, read and granted for the time of two weeks. Petition to F J Grant and others for a Street light Madison and Twelfth Streets read and granted. Communication from White and Munday in regard to claim of Providence Haspital for care of John Brandon, read and referred to Finance Committee. Application of Sidney Smith for a position on the Police force read and referred to Committee on Health and Police Petition of Western Washington Bible Society for change of ordinance in relation to book peddlers read and referred to Committee on License and Revenue. Petition of F A Fay for permission to repair building in the rear of the old San Francisco Store on Commercial Street, read and referred to Committee on Fire and Water. Petition of J J Post for permission to use a portion of Front Street for building material read and granted. Petition of Winsor & Co. for planking a portion of Front Street and raising sidewalk read and referred to Street Com. Petition of J R Kinnear and others for Fire Limits on 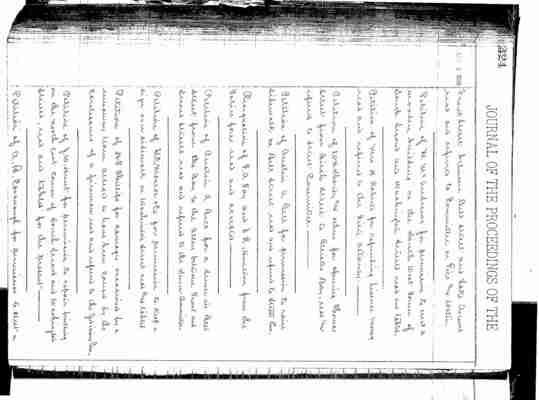 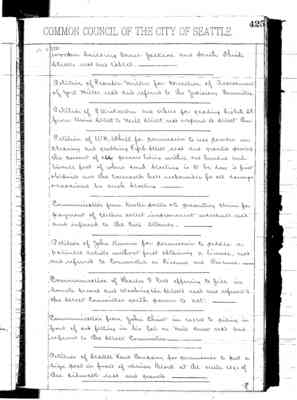 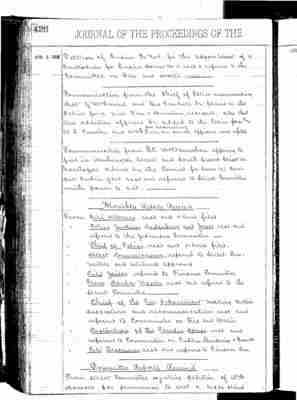 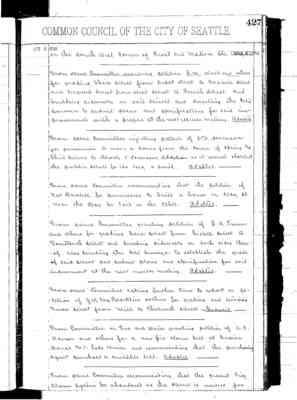