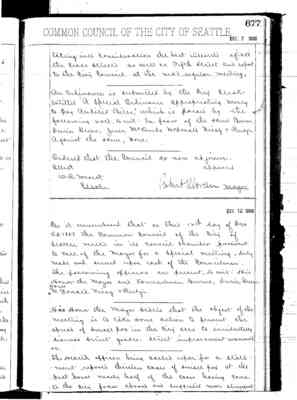 677 COMMON COUNCIL OF THE CITY OF SEATTLE Dec 7 1888 taking into consideration the best interests of all the Cross Streets as well as Fifth Street and report to the City Council at the next regular meeting. 1025 An Ordinance is submitted by the City Clerk entitled 'A Special Ordinance Appropriating Money to Pay Auditer Bills," which is passed by the following vote, to wit: In favor of the same Burns, Durie, Green, Jones, McCombs, McDonald Niesz & Reitze. Against the same, none. Ordered that the Council do now adjourn. Attest Approved WR Forrest Robert Moran Mayor Clerk Dec 12 1888 Be it remembered that on this 12th day of Dec AD 1888 the Common Council of the City of Seattle meets in its Council Chamber pursuant to Call of the Mayor for a special meeting duly made and served upon each of the Councilmen. The following officers are present, to wit: His Honor the Mayor and Councilmen Burns, Durie, Green, Jones, McDonald, Niesz & Reitze. His Honor the Mayor states that the object of the meeting is to take some action to prevent the spread of small pox in the City also to incidentally discuss street grades, street improvement warrants, etc. The Health Officer being called upon for a statement reports thirteen cases of small pox at the pest house nearly half of the cases having come to the city from abroad and suggesting more stringent 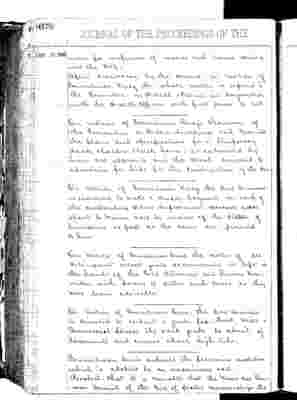 678 JOURNAL OF THE PROCEEDINGS OF THE Dec 12 1888 rules for inspection of vessels and trains coming into the City. After discussion by the Council on motion of Councilman Nietz the whole matter is referred to the Commitee on Health & Police in conjunction with the Health Officer with full power to to act. On motion of Councilman Rietze Chairman of the Committee on Public buildings and Grounds the plans and specifications for a temporary Hook & Ladder truck house, as submitted by him are approved and the clerk directed to advertise for bids for the construction of the same. On motion of Councilman Nietz the City Treasurer is instructed to make a small payment on each of the outstanding Street Improvement warrants now about to become void by reason of the Statute of limitations as fast as the same are presented to him. On motion of Councilman Durie the matter of all delinquent street grade assessments is left in the hands of the City Attorney and Finance Committee, with power to settle such cases as the may deem advisable. On motion of Councilman Green, the City Surveyor is directed to submit a grade for Front, Mill & Commercial Streets the said grade to admit of basements and sewers above high tide. Councilman Durie submits the following resolution which is adopted by an unanimous vote: Resolved: That is is desirable that the Mayor and Common Council of the City of Seattle memorialize the 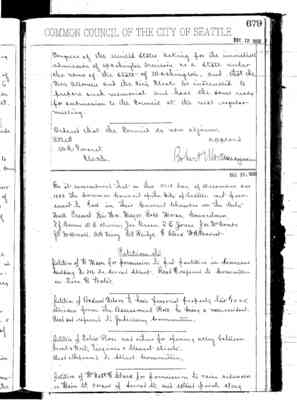 679 COMMON COUNCIL OF THE CITY OF SEATTLE Dec 12 1888 Congress of the United States asking for the immediate admission of Washington Territory as a State under the name of the State of Washington, and that the City Attorney and the City Clerk be instructed to prepare such memorial and have the same ready for submission to the Council at the next regular meeting. Ordered that the Council do now adjourn. Attest Approved WR Forrest Robert Moran Mayor Clerk Dec 21 1888 Be it remembered that on this 21st day of December AD 1888 the Common Council of the City of Seattle met pursuant to law in their Council Chambers in the City Hall. Present His Hon. Mayor Robt Moran, Councilmen F.J. Burns, D.E.Durie, Jos.Green, T.E.Jones, Jos. McCombs J.F. McDonald, U.R.Niesz, C.F.Reitzeand Clerk W.R.Forrest Petitions etc. Petition of W Mason for permission to put partition in Kinnears building No 216 So. Second Street. Read & referred to Committee on Fire & Water. Petition of Andrew Nelson to have personal property tax $1025. Stricken from the Assessment Roll he being a nonresident. Read and referred to Judiciary Committee. Petition of Felix Rose and others for opening alley between Front & West, Virginia & Stewart Streets. Read & Referred to Street Committee. Petition of McNatt & Clark for permission to raise sidewalk on Main St. corner of Second St. and extend porch along