Rev. Horatio Stebbins (1820-1902) received a Doctor of Divinity degree from Harvard Divinity School and was a minister in churches in Massachusetts and Maine from 1851 to 1864. In 1864 he came to San Francisco to become the pastor of the San Francisco Unitarian Church where he remained pastor until 1900. He became the Chairman of the Board of Trustees of the College of California (later University of California) and served on that board for 26 years. After John F. Miller, one of the Trustees named in the 1885 Founding Grant of Stanford University, died in March of 1886, it was Stebbins who was named to replace him later that year, becoming the first Stanford Trustee who was not named in the Founding Grant. Stebbins served on the Stanford Board of Trustees from 1886 until his death in 1902. He prayed at the laying of the cornerstone of Stanford University in May 1886. In 1893 Stebbins gave the sermon at the memorial service for Leland Stanford held on the Stanford Quad. 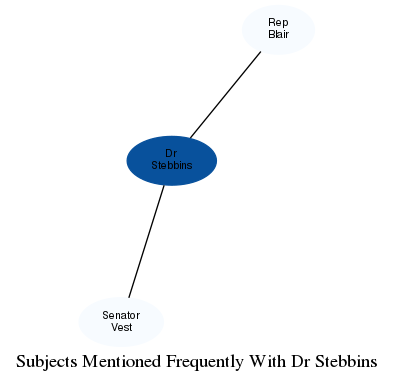 The graph displays the other subjects mentioned on the same pages as the subject “Dr Stebbins”. If the same subject occurs on a page with “Dr Stebbins” more than once, it appears closer to “Dr Stebbins” on the graph, and is colored in a darker shade. The closer a subject is to the center, the more "related" the subjects are.

Show pages that mention Dr Stebbins in all works