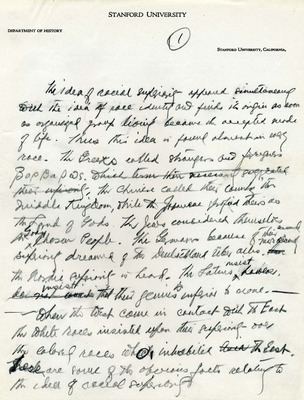 The idea of racial superiority appeared simultaneously with the idea of race identity and finds its origins as soon as organized group living became the accepted mode of life. Thus this idea is found almost in every race. The Greeks called strangers and foreigners Βαρβαρως. The Chinese called their country the Middle Kingdom, while the Japanese [identified?] theirs as the Land of Gods. The Jews considered themselves God's Chosen People. The Germans because of their [exceptional mass?] superiority dreamed of Deutschland über alles. The Nordic superiority is heard. The Latins insist however, that their genius is inferior to none.

When the West came in contact with the East the White races insisted upon their superiority over the colored races which inhabited the East. These are some of the obvious facts relating to the idea of racial superiority. 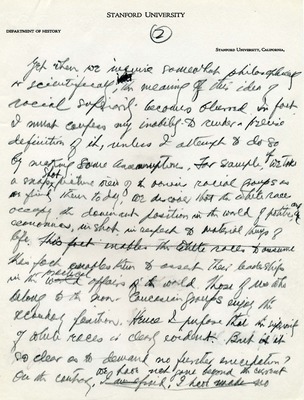 Yet when we inquire somewhat philosophically or scientifically, the meaning of this idea of racial superiority becomes blurred. In fact I must confess my inability to render a precise definition of it, unless I attempt to do so by making some assumptions. For example, if we take a snapshot picture view of various racial groups as we find them today, we discover that the white race occupy the dominant in the world of politics and economics, in short, in respect to material things of life. This fact enables them to assert their leadership in the practical affairs of the world. Those of us who belong to the non-Caucasian groups enjoy this secondary position. Hence I propose that this superiority of white races is clearly evident. But is it so clear as to demand no further [elucidation?]? On the contrary. We have not gone beyond the current

Last edit about 3 years ago by williamparkhurst 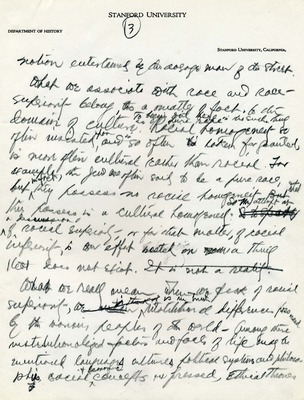 notion entertained by the average man of the street. What we associate with race and race superiority belong to a matter of fact. to this domain of culture. To begin with there is the such thing as pure race. Racial homogeny - so often insisted upon and is so often taken for granted, is more often cultural rather than racial. For example, the jews are often said to be a pure race, but in fact they possess no racial homogeny what they possess is a cultural homogeny. So my attempt at a discussion of racial superiority, or for that matter, of racial inferiority, is an effort [hosted?] on a thing that does not exist. What we really mean when we speak of racial superiority, is in truth institutional differences possessed by the various peoples of the world - among these institutionalized factors and facts of life may be mentioned languages, cultures, political systems and philoso phies, social and economic concepts expressed, ethical theories 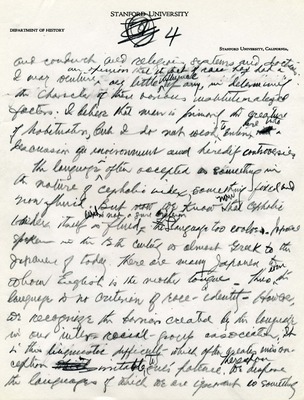 and conduct and religious systems and doctrines. I may venture an opinion that it is not a case ? had a our little difference if any, in determining the character of these various institutionalized factors. I believe that man is primarily a creature of habituation, but I do not wish to enter here into a discussion of environment and heredity controversies.

The language is often accepted as something in the nature of cephalic index, something fixed and non fluid. But we know now that cephalic index itself is fluid and is not a sure [prediction?]. The Language too evolved. Japanese spoken in the 15th century is almost Greek to the Japanese of today. There are many Japanese to whom English is the mother tongue. Thus [even?] this language is not criterion of race-identity - However, we recognize the former created by this language is our inter-racial-group association, It is this linguistic difficulty - which often creates one's conception [imitable?] to one's [future?]. Therefore we disprove the languages of which we are [?] as something 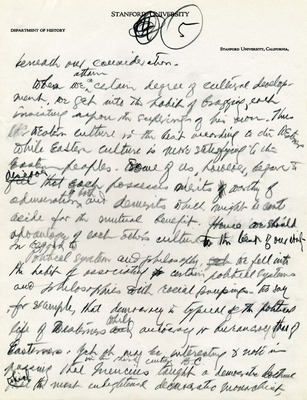 When we attain a certain degree of cultural develop ment, or get into the habit of bragging, each insisting upon the sufferings of his own. Thus Western culture is the best according to the Westerns while Eastern culture is more satisfying to the Eastern peoples. Some of us, however, began to desire that each possesses merits worthy of admiration of both and demerits which might be [set?] aside for the mutual benefit. Hence we should advantages of each others' culture to the best of our ability.

In regard to Policial system and philosophy we fell into the habit of associating certain political systems and philosophies with racial groups. We say for example, that democracry is typical of the political life of Westerners while autocracy or [bureaucracy?] that of Easterners. Yet it may be interesting to note in in the third century B.C. passing that Mencius taught a democractic doctrine which then must enlightened democratic monarchist, 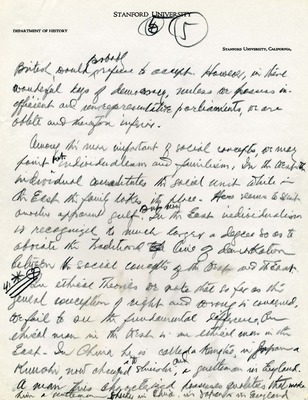 British would probably refuse to accept. However, in these wonderful days of democracy, unless we possess an efficient and unrepresentative parliaments, we are [oblete?] and therefore inferior.

Among this [more?] important of social concepts, we may point out individualism and familism. In the West the individual constitutes the social unit while in the East the family takes its place. Here seems to exist another apparent gulf. But now in the East individualism is recognized to much larger a degree so as to obviate the traditional line of demarcation between the social concepts of the West and the East.

41 * (+) In ethical theories we note that so far as this general conception of right and wrong is concerned, we fail to see the fundamental difference. An ethical man in the West is an ethical man in the East. In China he is called a [Kungtso?], in Japan a [Kunshi?], now changed to [shuishi?] and, a gentelman in England. A man thus characterized possesses qualities that make him a gentleman whether in China, in Japan or in England 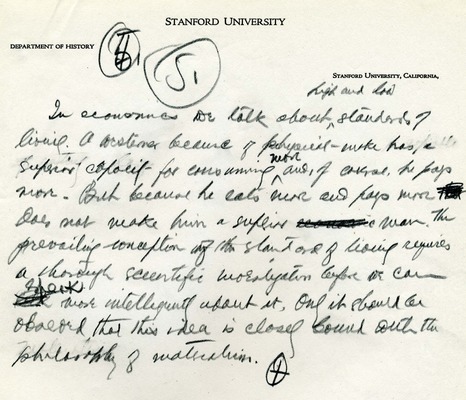 In economics we talk about high and low standards of living. A Westerner because of [physical - make?] has a superior capacity for consuming more and, of course, he pays more. But because he eats more and pays more does not make him a superior man. The prevailing conception of the standard of living requires a thorough scientific moralization before we can speak more intelligently about it. Only it should be observed that this idea is closely bound with the philosophy of materialism. (+) 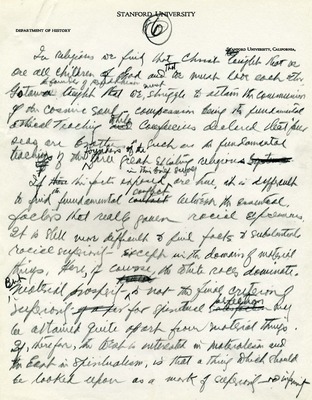 In religions we find that Christ taught that we are all children of God and the we must love each other. Gotama, the founder of Buddhism, taught that that we must struggle to attain the communion of the cosmic soul - compassion being its fundamental ethical teaching. While Confucious declared that four seas are brothers - such are the fundamental teaching of the founders of three great existing religions.

If the facts exposed in this brief survey are true, it is difficult to find the fundamental conflict between the essential factors that really govern racial [efemeris?]. It is still more difficult to find facts to substantiate racial superiority - except within domains of material things. Here, of course, the white race dominate. But material prosperity - is not the final criterion of superiority for spiritual perfection may be obtained quite apart from material things. If, therefore, the world is interested in materialism and the East in spiritualism, is that a thing which should be looked upon as a mark of superiority or inferiority?