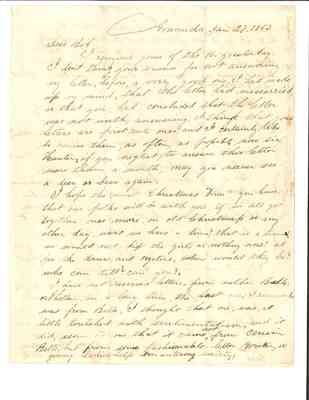 Dear Bob I received your's of the '16, yeasterday, I don't think your excuse for not answering my letter, before, a verry good one, I had made up my mind, that the letter had miscarried or that you, had concluded that the letter was not worth, answering, I think that your letters are first rate ones, and I certainly like to receive them, as often, as possible, now sir Hunter; if you neglect, to answer this letter more than a month, may you neaver see a deer or bear again.

I hope the next Christmas "time" you have, that our folks will be with you if we all get together once more, an old Christmas or any other day, won't we have a time? that is a time! we would not kiss the girls or nothing o no! as for the danse, and oysters, where would they be? who can tell? can you?

I have not received letters, from eather Belle or Hellen, in a long time, the last one, I received was from Belle, I thought that one, was a little toutched with sentimentalism, and it did, seem to me, that it came ^not^ from Cousin Belle, but from some fashionable letter writer, or young ladies help on entering society; 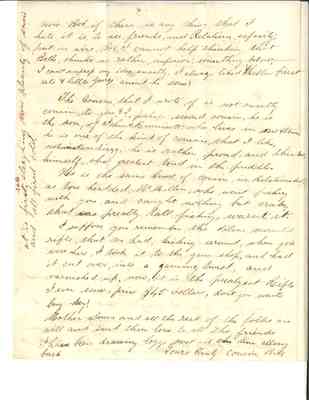 now Bob if there is any thing that I hate, it is, to see, friends, and Relations, especialy put on airs, Bob, I cannot help thinking, that Belle, thinks us rather, inferior: something below; — I can't express my idea exactly, I always like Hellen first rate & little George aren't he some?

The Cousin, that I wrote, of is not exactly cousin, to you, & I, perhaps second cousin, he is the son, of John A. Kennicutt: who lives in New [Albion??] he is one of the kind of cousins, that I like, notwastanding, he is rather proud. and thinks himself, the greatest toad in the puddle.

He is the same kind of cousin, in Relationship as tow headded, McMillen; who went fishing with you, and caught nothing but crabs, that was preatly tall fishing, warnt it.

I suppose you remember, the silver mounted rifle, that we had, kicking arround, when you were here, I took it to the gun shop, and had it cut over, into a gaming twist, and varnished up, now, it is the preatyest Rifle I ever saw, prise $45. dollars, don't you waite buy hey! 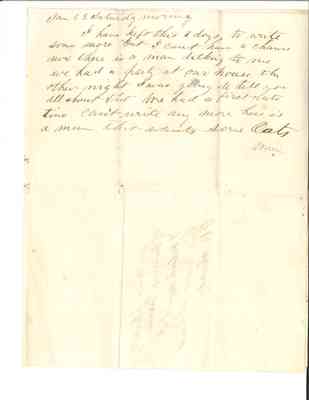 Jan 29, Saturday morning I have kept this 3 days to write some more but I can't have a chance now there is a man talking to me we had a party at our house the other night I was going to tell you all about that. We had a first-rate time. Can't write any more here is a man that wants some oats [Wm?] 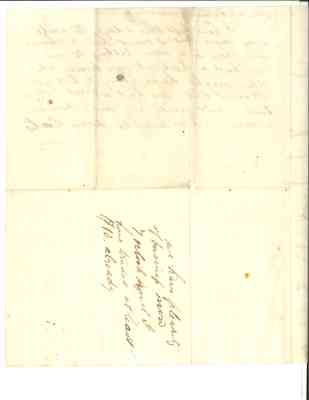