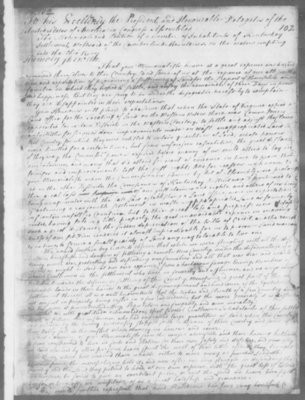 To his Excellency the President, and Honourable Delegates of the United States of America in Congress Assembled The Memorial and Petition of a number of inhabitants of Kentuckey Settlement, westward of the Cumberland on the waters empting into the Ohio River Humbly then ask.

That your Memorialists have at a great expense and hazard removed themselves to this country (and some of us at the expence of our all) with a view and expectation of procouring a sufficiency of land for the support of themselves and families, on which they hoped to settle, and enjoy the remainder of their Days in peace and happiness. But they are sorry to be under the disagrable necessity to complain - they are disappointed in their expectations.

Your Hounours will please to observe that when the State of Virginia opened a Land Office for the locating of land on the western waters, there was Commissioners appointed for certain Districts in the western Teritory, to settle and adjust the claim ants Titles for Services done improvements made on vast unappropriated Land in said Country, for which they were entitled to certain quantities of Land; whose powers were limitted for a certain time, but for unforeseen casualities, the great distance of their way, the Commissioners powers expired before many of us could attend to lay in our claims, and many that did attend for want of evidence in time to prove services and improvements lost the just right; and for reasons unknown to your Memorialists, when the Commissioners powers by Act of Assembly were prolong ed in the other Districts, the Commissioners of Kentuckey District were Discontinued to their great loss (three words crossed out) of our just claims and rights, and others of us being unaquainted with the late Law establishing a Land Office, were in expectation of obtaining a reasonable settlement in waste unappropriated Land as formerly in frontier unsettled Countries, but to their great loss and surprise were disap ointed having lost our little property, the great unavoidable expense in moving such a great distance, the sudden depreciation of the Bills of Credit, and the [remot? nace?] of our petition rendered it almost impossible for us to procure Land warran ts in time to secure a small quantity of land anyway tolerable live on.

We would further beg leave to observe that while we were strugling with all the diff iculties, hardships, and dangers of settleing a remote new Country under the disadvantage of a bloody cruel war, protecting and defending our families and all that was dear and near to us (and as might be said at our own expense) from a barbarous savage Enemy, numbers of [novice?] Gentlemen in the Settlement who lived in security and [aflunce?], and no way con tribute towards the defense of settleing of this Country, monopolized great part of the [more?] valuable lands in their hands to the great dicouragement and hindurance of the Equitable settlement there of. It is a well known truth that the riches and strength of a free Country does not consist in property being vested in a few individuals, but the more generaly it is [unreadable] ted the more it promoted Industery, Population, and frugality, and even morality.

Altho We with gratitude acknowledge that several Gentlemen Inhabitants of this settle ment of fortune and influence who had [engrosed?] large quantities of land when this country was invaded by the Enemy generously stepped forth in defense of their country and some of them nobly fell in the conflict, whose memory we honor and revere.

That a number of your Memorialists from the cause above said and their having had Land to been [conformed?] to live in forts and stations for their own safety and defense, and generally on Land claimed by other persons, leave spent the most of their little affects they brought with them which had rendered them unable either to move away or purchase Land at his [horrid?] price. the monopolizers hold it and now after our long struggle in defending the Country and Land they pretend to hold at our own expense, with great loss of [unreadable] and treasure, to be forced to give an exorbitant price, or rent the Land we have been fight ing for, or leave off, we complain of as a great hardship and grievance.

Last edit over 8 years ago by San Jac Descendant 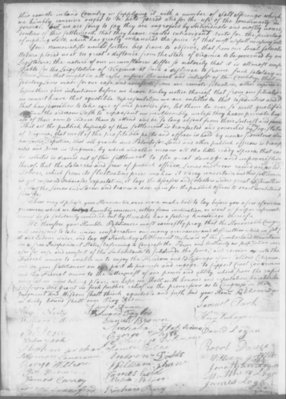 this remote inland Country in supplying it with a number of Salt Springs which we humbly conceive ought to be held sacred and for the use of the community in general, but we are sorry to say they are engrossed by Individuals and mostly nonresidenters of this settlement, that they heave exacted extravigant rents for the privilag of making Salt, which has greatly enhanced the price of that most usefull necessary (act).

Last edit over 5 years ago by David Kaminski 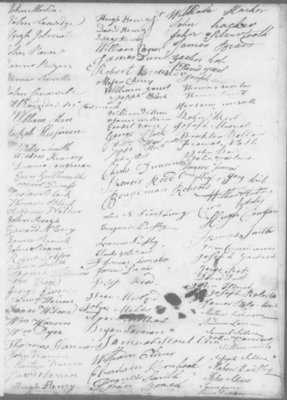 Last edit 11 months ago by heidimarie
All 3 records