Benjamin Jennings
A Tatungalung man who resided at Lake Tyers station during the 1870s. Benjamin was born on Gunaikurnai country in the late 1830s, early 1840s. In 1871 he married Caroline Chase and there are records indicating that they had two children – Alfred and Isaac. Benjamin died in 1878, aged 40, of gastric fever. His son Alfred died the same year of ‘inflammation of the lungs’, aged 5. Isaac died in 1923, aged 46.
Benjamin was granted a work certificate the same year of his marriage. This was required under Victorian government legislation to allow Benjamin to leave Lake Tyers and work elsewhere. The 1869 Aborigines Protection Act and 1871 Regulations made under the Act stated the Board for Protection of the Aborigines could grant certificates for Aboriginal people to be employed under contract off mission stations and Aboriginal reserves. These certificates were renewed 6 monthly and included physical descriptions of the person named on the certificate. The prescriptive 1869 Act and 1871 Regulations were, as described by historian Richard Broome, ‘a sharp departure from earlier non-coercive policies’ and in their enactment the Victorian colonial government became the first to legislate the management of Aboriginal people living within its borders. There is no indication of the work that Benjamin did, however Aboriginal people often undertook seasonal work such as bark cutting, shearing, stock keeping, harvesting and sheep washing.
References:
Board for the Protection of the Aborigines, Eighth Report, John Ferres, Government Printer, Melbourne, 1872, p. 30.
Board for the Protection of the Aborigines, Sixteenth Report, John Ferres, Government Printer, Melbourne, 1880, p. 11.
The Central Board Appointed to watch over the interests of the Aborigines, Fifth Report, John Ferres, Government Printer, Melbourne, 1866, p. 10.
Caroline Chase and Benjamin Jennings, Marriage Certificate, 1871, Births, Deaths and Marriages Victoria, Registration number: 2306/1871.
Richard Broome, Aboriginal Victorians: A History since 1800, p. 130. 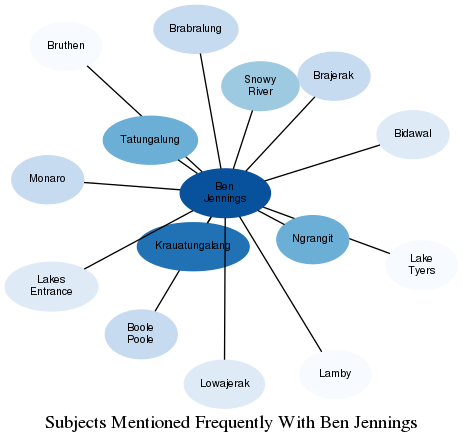 The graph displays the other subjects mentioned on the same pages as the subject “Ben Jennings”. If the same subject occurs on a page with “Ben Jennings” more than once, it appears closer to “Ben Jennings” on the graph, and is colored in a darker shade. The closer a subject is to the center, the more "related" the subjects are.

Show pages that mention Ben Jennings in all works