Howitt (1904) spells this word as birraark.
Howitt (1904: 389) describes as follows: "the functions of the Birraark are separated from those of the medicine-man (Mulla-mulung). The former combined the functions of the seer, the spirit-medium, and the bard, for he foretold future events, he brought the ghosts to the camp of his people at night, and he composed the songs and dances which enlivened their social meetings. He was a harmless being, who devoted himself to performances which very strikingly resembled those of the civilised “mediums.”"
The names of eight birraark, who were living in 1842, together with their clan / tribe affiliations, is given in Howitt (1904: 392) 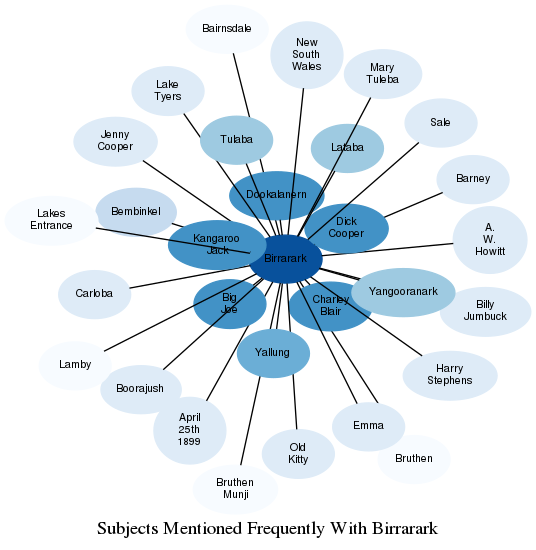 The graph displays the other subjects mentioned on the same pages as the subject “Birrarark”. If the same subject occurs on a page with “Birrarark” more than once, it appears closer to “Birrarark” on the graph, and is colored in a darker shade. The closer a subject is to the center, the more "related" the subjects are.

Show pages that mention Birrarark in all works