Lissarrague (2006) treats Geawegal as a term referring to people. She describes the 'Language from the Hunter River & Lake Macquarie' (no name given to this language) as the language which was spoken by people known as Awabakal S66, Kuringgai S62, Wonnarua S63, and possibly Geawegal (E1). In her later work with Wafer (Wafer and Lissarrague 2008:165-166), however, Kayawaykal (Geawegal) is treated as a dialect name (or a dialect name as well as a people name), a dialect of the Hunter River-Lake Macquarie language. They report that the only available linguistic data on Kawawaykal (Geawegal) is the six morphemes in Fison and Howitt (1880).
AIATSIS code: E1
AIATSIS reference name: Geawegal 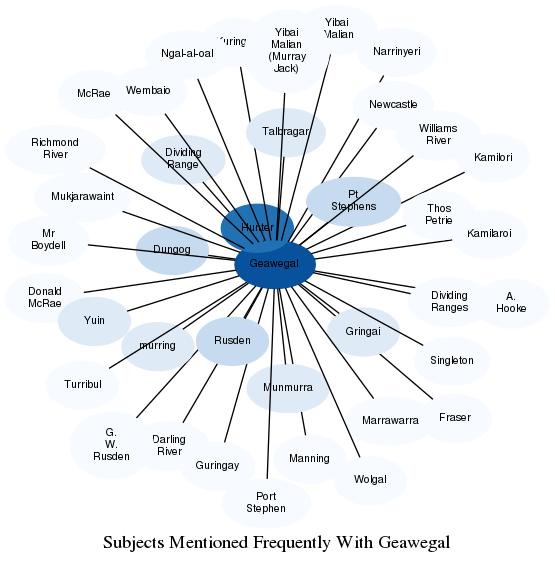 The graph displays the other subjects mentioned on the same pages as the subject “Geawegal”. If the same subject occurs on a page with “Geawegal” more than once, it appears closer to “Geawegal” on the graph, and is colored in a darker shade. The closer a subject is to the center, the more "related" the subjects are.

Show pages that mention Geawegal in all works