Also known as Captain Turnbull he was a great maker of songs, which, as Barak said, "made people glad when they heard them," but when he sang one of them to Barak, it had the contrary effect, for it made him shed tears. Also identified as Ning-qua-la-val, he came of a family of gifted singers, for his father and grandfather had been renowned songmakers, and this, as well as his own poetical power, was the cause of his great authority as a Ngurungaeta, not only in his own tribe, but also in those adjoining. 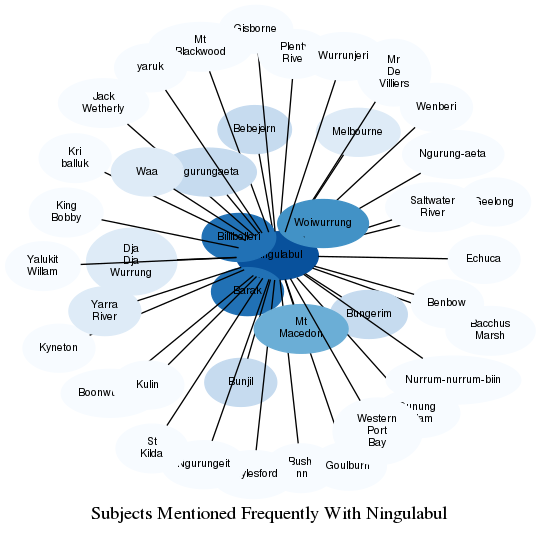 The graph displays the other subjects mentioned on the same pages as the subject “Ningulabul”. If the same subject occurs on a page with “Ningulabul” more than once, it appears closer to “Ningulabul” on the graph, and is colored in a darker shade. The closer a subject is to the center, the more "related" the subjects are.

Show pages that mention Ningulabul in all works

Only search text of pages which do not link to Ningulabul