Müller was a nineteenth century philologist. He was born in German-speaking Dessau in 1823, where he first studied, before moving to Leipzig University. It was here Müller began studying Sanskrit, something he continued and expanded by including the Vedic language, after moving to Berlin and then Paris, learning from leaders in this field. In further pursuit of his studies and research in these languages Müller moved to London in 1846. His research and publications saw him championed as a leader in Eastern Languages and the recipient of numerous honours. Müller has been described as the ‘founder of philology’ in England.
Reference:
Leon Delbos 1900, ‘Professor Max Müller’, The Modern Language Quarterly, vol. 3, no. 2, pp. 101-103. 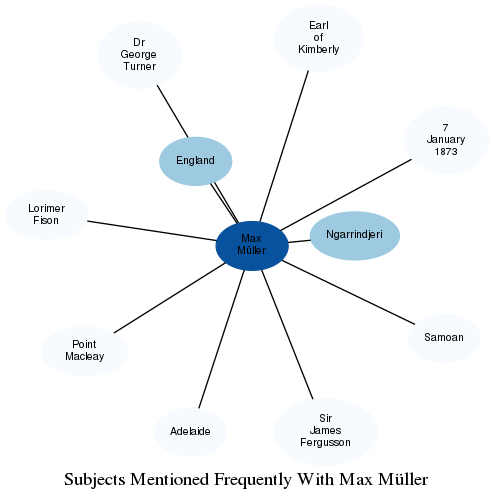 The graph displays the other subjects mentioned on the same pages as the subject “Max Müller”. If the same subject occurs on a page with “Max Müller” more than once, it appears closer to “Max Müller” on the graph, and is colored in a darker shade. The closer a subject is to the center, the more "related" the subjects are.

Show pages that mention Max Müller in all works