Mragula was born c.1813 in the Tumut region of NSW. Described by Howitt as a Wolgal informant, Mragula another Wolgal man, Yibai Malian (Murray Jack) were instrumental in the enactment of the Kuringal ceremony documented by Howitt in 1883. During the ceremony Mrgaula claimed that he had lost some of his ritual powers after having drunk ‘too much hot tea’. As is evidenced by his other name, Singing Johnny, Mragula was a renowned singer and composer of song. One of his compositions, a song describing an attempt to cross a flooded Snowy River in a leaky bark canoe, was said to have been taken up and sung by the Gannai/Kurnai in Gippsland. Howitt noted the ‘pantomimic’ actions that accompanied the singing of this song as vividly depicting the pushing off of the canoe, paddling into the stream, the discovery of a leak, bailing out water and the hurried return to shore. 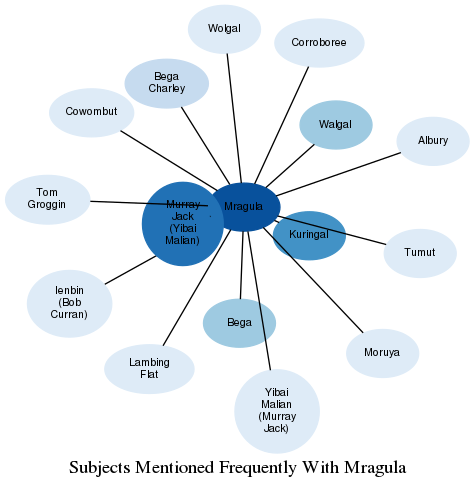 The graph displays the other subjects mentioned on the same pages as the subject “Mragula”. If the same subject occurs on a page with “Mragula” more than once, it appears closer to “Mragula” on the graph, and is colored in a darker shade. The closer a subject is to the center, the more "related" the subjects are.

Show pages that mention Mragula in all works