Jimmy Tongai was a Bidawal man born sometime around 1833 at Booropa (Mount Ellery) in Far East Gippsland. Tongai was apparently the son of a Krauatun man from Cann and a Theddora woman from Buchan Gelantipy but was also known for having traditional rights to harvest Bogong moths around the Valentine River area. Tongai’s grandfather, from the ‘Buckan mittung’ locality, had allegedly escaped to the Mt Ellery region after transgressing tribal law by marrying a woman from the Omeo area who was considered his classificatory daughter. Tongai however married a Ngarigo woman, also from Booropa, and the couple had a daughter named Sarah Tongai. Sarah Tongai, like her mother belonged to the tchūteba (rabbit rat) ‘totem group’, and later become renowned for her prowess as a traditional healer.

Tongai seems to have been one of the last Aboriginal people in the Gippsland region to live a traditional nomadic lifestyle. Writing in 1904, Howitt indeed states that Tongai was the last people in the Monaro region to ‘come in’ to live on stations in 1870-71, but other sources this suggest that this could have been as late as 1877. Both the Royal Commission on the Aborigines report (1877) and the writings of the manager of the Lake Tyers mission, John Bulmer, refer to the coming in of ‘wandering’ tribes during the course of that year. The Board discusses both a group describing themselves as ‘Murray Blacks’ who came down from the Monaro tablelands to live at Lake Tyres and another thirty ‘Maneroo’ people who had recently taken up residence at Bidwell station. Tongai most likely belonged to this ‘Maneroo’ group, whose migration was apparently motivated by a desire to access education and to escape the devastation caused by an outbreak of measles in the Monaro tablelands.

The descendants of the early European settlers in the Bendoc region remember Jimmy Tongai as being involved in guiding their families through the area. Tongai’s contribution to the settlement of the area can be seen in the broader context of the often invaluable knowledge and assistance provided by Aboriginal guides to early explorers and settlers across the continent. Tongai also, though only briefly, provided information to A.W. Howitt on Bidawal class names, locality, marriage rules, initiation, tribal authority and language. In what is possibly a blanket distribution list, Howitt records Tongai, his wife and his daughter as also being present at the Kuringal (initiation ceremony) that was witnessed by Howitt at Bega in 1883.

At some point in his life, Jimmy Tongai moved to the Delegate mission. In an intriguing newspaper article from 1900, Jimmy Tongai is recorded as being one of three Aboriginal men from the ‘Manaro tribe’ who sought free railway passes in order to visit Sydney for the upcoming Commonwealth Celebrations. The Aboriginal Protection Board deferred the request on the grounds that the matter needed ‘further consideration’, but it is unlikely that the men were permitted to visit Sydney as the issue never reappeared in their meeting minutes. Tongai passed away three years later from ‘senile decay’ (although others claim that he fell from a tree) at Bendoc and was buried at the local cemetery in March of that year. 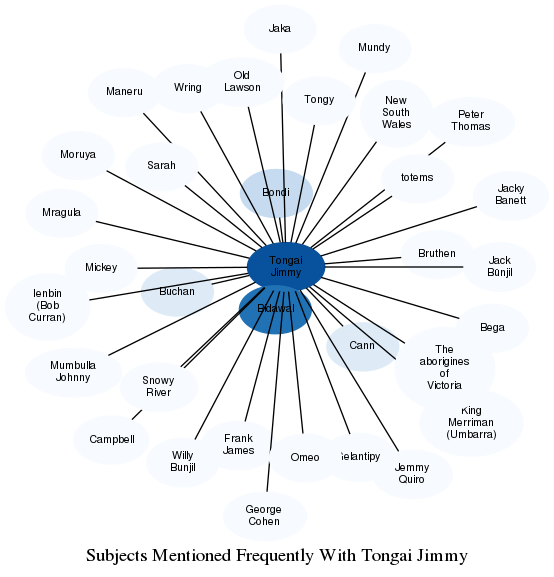 The graph displays the other subjects mentioned on the same pages as the subject “Tongi”. If the same subject occurs on a page with “Tongi” more than once, it appears closer to “Tongi” on the graph, and is colored in a darker shade. The closer a subject is to the center, the more "related" the subjects are.

Show pages that mention Tongi in all works