Charley Blair’s country was around Bruthen and he was a Brabralung man. Charley’s parents were Dick Cooper and Mary. Charley died of heart disease in October 1902 aged 58, indicating he was born around 1844. Some time around 1870 Bulmer responded to the request of Robert Brough Smyth for details about the Aboriginal people living on reserves and missions. Bulmer identified Blair as a ‘young man’ of 28 years. This would put Blair’s birth year a little earlier, around 1842 and would accord with him being a young boy when colonists first came to Gunaikurnai country, as Blair described his memory of this to Howitt. Charley’s death was recorded at Lake Tyers, and archival records indicate he lived there for some years, since at least 1870. He lost a son, Charles, in 1889 at only eleven years of age. Charles junior had died of a Cerebral tumor.
Charles provided information about Gunaikurnai cultural practices to Howitt and to John Bulmer for Howitt. Blair also attended the 1884 Jeraeil Howitt was involved with. Howitt and Blair went hunting together on this occasion, returning with possum for the camp to eat. At times informants for Howitt would re-enact situations to show Howitt how things were done, sharing of information was performative as well as verbal. For example, in describing the process of messengers, Blair demonstrated the process of meeting a messenger, who in this instance was depicted by Charley Rivers.
References:
BPA, Twenty-sixth Report of the Board for the Protection of the Aborigines, Robt. S. Brain, Government Printer, Melbourne, 1890, p. 9.
BPA, Thirty-ninth Report of the Board for the Protection of the Aborigines, Robt. S. Brain, Government Printer, Melbourne, 1903, p. 11.
Robert Brough Smyth, The Aborigines of Victoria, vol. 1, John Ferres, Government Printer, Melbourne, 1878, p. 3. 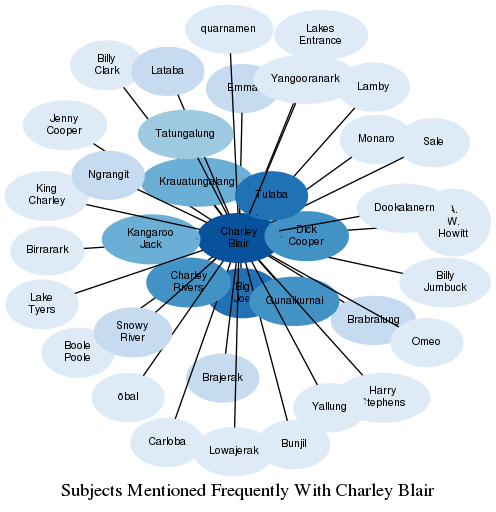 Show pages that mention Charley Blair in all works