Framlingham Aboriginal Station operated on Kirrae Wurrung country from 1865-1890, when the Board for Protection of Aborigines closed it. Aboriginal people continued to live on the site after closure, protesting efforts to remove them throughout the twentieth century. In 1970 Framlingham was handed to the Framlingham Trust under the Aboriginal Lands Act.
https://www.findandconnect.gov.au/ref/vic/biogs/E000929b.htm 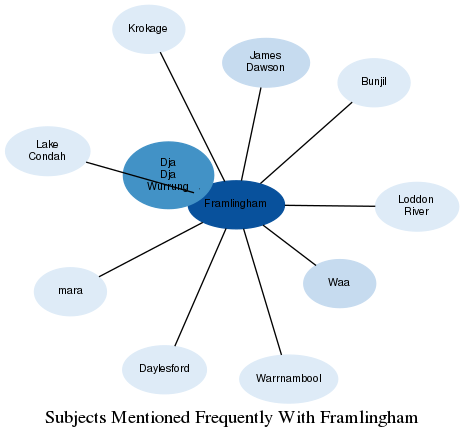 The graph displays the other subjects mentioned on the same pages as the subject “Framlingham”. If the same subject occurs on a page with “Framlingham” more than once, it appears closer to “Framlingham” on the graph, and is colored in a darker shade. The closer a subject is to the center, the more "related" the subjects are.

Show pages that mention Framlingham in all works