AIATSIS code: D32
AIATSIS reference name: MURUWARI / MURRAWARRI
According to Oates's informant (1988:6), Muruwari people consist of five groups: Nuntukuri D50, Kungakuri D49, Kuntakuri D53, Thinuntu D52 and Purukuri D51, but it is not certain whether each of these groups had a separate dialect. Walsh (1981) treats these names as dialect names, while Radcliffe-Brown (1923:434) mentions the first two and calls them 'sub-tribes' who probably spoke different dialects.
See: https://collection.aiatsis.gov.au/austlang/language/d32 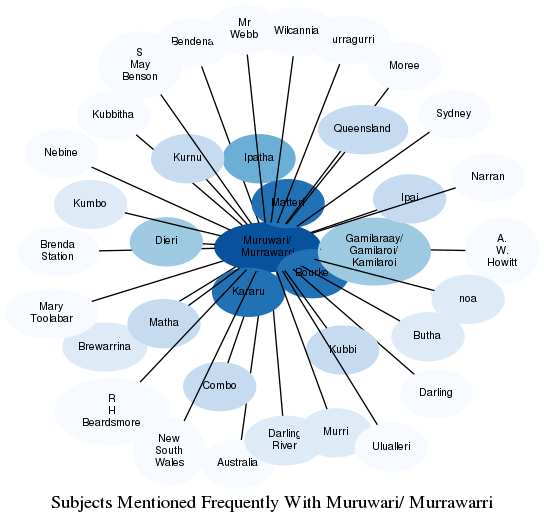 The graph displays the other subjects mentioned on the same pages as the subject “Muruwari”. If the same subject occurs on a page with “Muruwari” more than once, it appears closer to “Muruwari” on the graph, and is colored in a darker shade. The closer a subject is to the center, the more "related" the subjects are.

Show pages that mention Muruwari in all works