Lang was a Scottish classical scholar, literary critic and Folklorist. He was educated at the University of St Andrews and matriculated from Oxford University in 1864, where he then became a Fellow. Lang was required to leave Oxford University after his engagement, because of rules forbidding Fellows to be married. From then on he earned his living as a writer, leaving behind a legacy of over 120 books and more that 5000 essays and articles on his death. Lang had many disagreements with his contemporaries over his anthropological ideas regarding folklore, including Howitt and Fison. 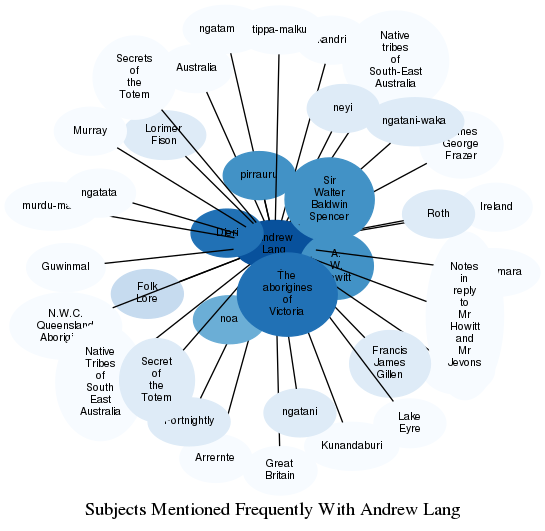 The graph displays the other subjects mentioned on the same pages as the subject “Andrew Lang”. If the same subject occurs on a page with “Andrew Lang” more than once, it appears closer to “Andrew Lang” on the graph, and is colored in a darker shade. The closer a subject is to the center, the more "related" the subjects are.

Show pages that mention Andrew Lang in all works