S May Benson lived at Brenda Station, Goodoga, NSW, with her parents and her siblings. It is not certain how or when she obtained one of Howitt’s circulars, but the correspondence between them indicates that she was answering one of his circulars on kinship.
Their correspondence occurred through 1906 and 1907, after Howitt had published his 1904 book Native Tribes of South East Australia. Benson had terrible hand writing – there are letters that Howitt himself has transcribed, writing the words he was guessing at either above Benson’s elongated scrawl on the page, or on a separate page entirely. This did not stop a correspondence where Benson sought to gather any necessary information for Howitt and Howitt in turn offered support for Benson’s interest in Folklore. Howitt sent Benson an unnamed book on folklore and encouraged her to publish. Whilst living in the Goodoga region until at least 1915, it would appear that Benson (married name McConachie) did not publish under her own or her married name. Benson died in 1965. 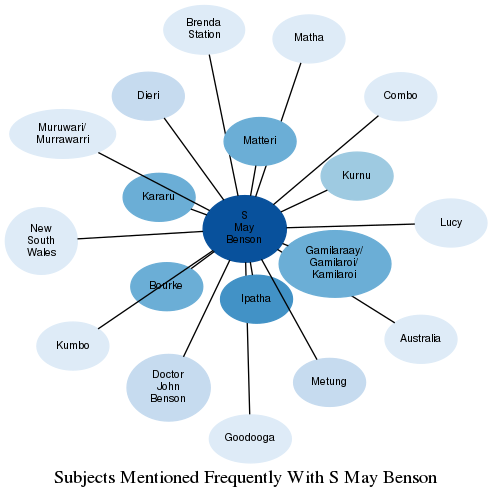 The graph displays the other subjects mentioned on the same pages as the subject “S May Benson”. If the same subject occurs on a page with “S May Benson” more than once, it appears closer to “S May Benson” on the graph, and is colored in a darker shade. The closer a subject is to the center, the more "related" the subjects are.

19 pages refer to S May Benson

Show pages that mention S May Benson in all works