Yibai-Malian, also known as Murray Jack, was a Wolgal man from the Tumut area in New South Wales. Photographed wearing a breastplate that describes him as ‘King of the Wolgal’ Malian was apparently born at Talbingo (near Tumut) c.1820. He died c.1891. A.W. Howitt described Malian as an extremely important ceremonial leader and expert in the region and as having a ‘great influence over the scattered remnants of the Coast Murring and Ngarigo, as well as of the Wolgal’. Malian’s father was apparently a renowned "blackfellow doctor" of the Wiradjuri tribe and of the waralang (brown snake) totem, while his mother was a tchuteba (‘rabbit rat’) woman of the Theddora people in the Omeo district. These familial ties meant Malian had he occupied an important place during ceremonial meetings involving various groups across southern NSW. Howitt’s notebooks and publications frequently mention Malian’s activities as a singer, ceremonial leader and organiser during the Kuringal initiation ceremony of 1883.

Equally known by his European name, Murray Jack, Malian’s traditional name consisted of two kin terms. Yibai (or Yipay), referring to his section or ‘skin name’ and ‘Malian’, referring to his membership of the Eaglehawk moiety. Little is known of Malian’s own family but his daughter, Janey Alexander, is on record having also provided information to Howitt. In 1877 Malian brought 43 Wolgal, Monaro and Maap people in to Lake Tyers.

It has been claimed by some in the Yuin community that Murray Jack was the 'brother' of Mragula. 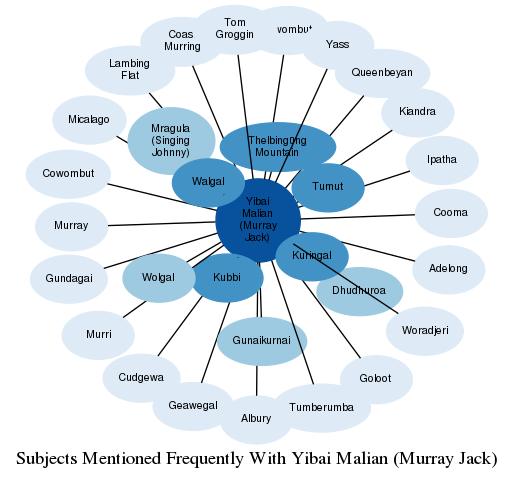