The ngurungaeta of the Marin-Bulluk of the Wurundjeri people, who dwelt on the western side of the Saltwater River (Maribyrnong River). Barak told Howitt how Bungerim was the person to whom Billibelleri 'gave his word' and stood beside him- that is that Bungerim acted as Billibellari's spokesperson in negotiations, for example with the Wadawurrung (See Howitt: 1904, p. 341). Barak described how he 'had beside him' Robert Wandin, Tom Mansfield and Tom Donnelly. Historian Penny van Toorn has written of how Barak used this practice during the petitions and protests at Coranderrk (see Penny van Toorn, Writing Never Arrives Naked: Early Aboriginal Cultures of Writing in Australia, Aboriginal Studies Press, Canberra, 2006, pp. 123-151) 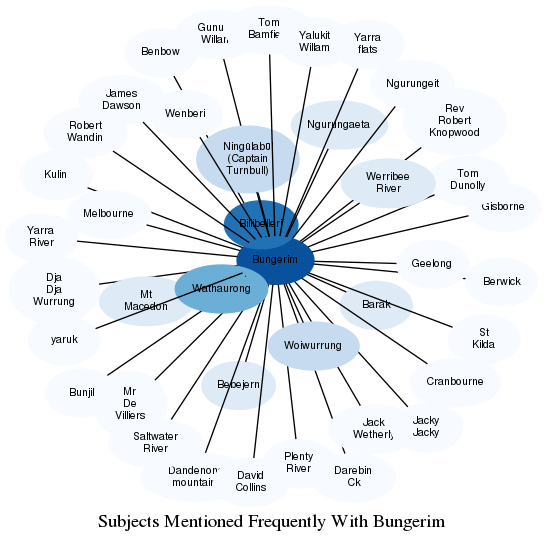 The graph displays the other subjects mentioned on the same pages as the subject “Bungerim”. If the same subject occurs on a page with “Bungerim” more than once, it appears closer to “Bungerim” on the graph, and is colored in a darker shade. The closer a subject is to the center, the more "related" the subjects are.

Show pages that mention Bungerim in all works

Only search text of pages which do not link to Bungerim