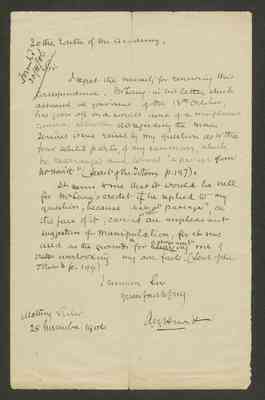 To the Editor of the Academy

I regret the necessity for renewing this correspondence. Mr Lang in his letter which appeared in your issue of the 13th October, has gone off on a small issue of a misplaced comma, altogether disregarding the more serious issue raised by my question as to the four selected parts, of my summary, which he rearranged and termed "a passage from Mr Howitt" (Secret of the Totem p. 197)

It seems to me that it would be well for Mr Lang's credit if he replied to my question, because that so called "passage", on the face of it, carried an unpleasant suggestion of manipulation, for it was used as the grounds for [charging - crossed out] a charge against me of [with -crossed out] overlooking my own facts. (Secret of the Totem p. 199)