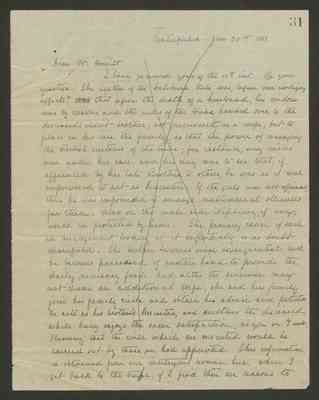 I have received yours of the 11th inst. Re [underlined] your question. The custom of the Dalebura tribe was, before our civilizing effects? [was - crossed out] that upon the death of a husband, his widow was by custom and the rules of the tribe handed over to the deceased's eldest brother,not necessarily as a wife, but to place in his care the family, so that the power of managing the tribal customs of the tribe; for instance, any nieces were under his care and his duty was to see that, if affianced by his late Brother to others, he was as it were empowered to act as Executor. If the girls were not affianced then he was empowered to arrange matrimonial alliances for them. Also on the male side Nephews, (if any) would be protected by him. The primary cause of such an arrangement, looking at it impartially, is no doubt manifold. The brother becomes more consequential, and he becomes possessed of another hand to provide the daily necessary food. And altho the survivor may not desire an additional wife, she and her family join his family circle and obtain his advice and protection. He acts as his brother's Executor, and doubtless the deceased, while living enjoys the same satisfaction, as you or I would, knowing that the will which we executed would be carried out by those we had appointed. This information is obtained from our intelligent woman here, when I get back to the tribe, if I find there are reasons to

Last edit 27 days ago by ALourie 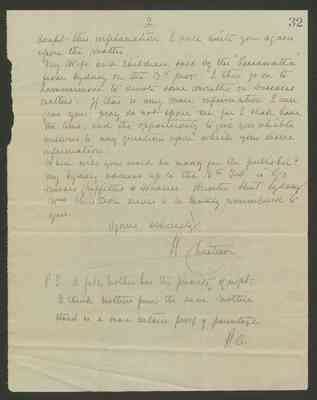 doubt this explanation, I will write you again upon the matter.

My Wife and children sail by the "Parramatta" from Sydney on the 17th prot.. I then go on to Lammermoor to devote some months on business matters. If there is any more information I can give you, pray do not spare [underlined] me, for I shall have the time and opportunity to give you reliable answere to any questions upon which you desire information.

When will your work be ready for the publisher? My Sydney address up to the 18th Feb. is C/o Messrs Griffiths & Weaver. Hunter Street Sydney. Mrs Christison desires to be kindly remembered to you.

P.S. A full brother has the priority of right. I think brothers from the same mother stand as a more certain proof of parentage. R.C.

Last edit about 1 month ago by ALourie
All 2 records