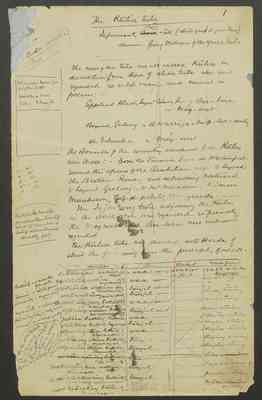 The men of this tribe are all called Kūlin in distinction from those of alien tribes who are regarded as wild men and named as follows: - Gippsland blacks beyond Tarwin River = Bér-bira or Méy-met Beyond Geelong = B Warrije = Far off - Bek = country at Echuca = Méy-met The bounds of the country occupied by the Kūlin were these: from the Tarwin River in Westernport round the spurs of the Australian alps to beyond the Broken River; and extending westward to beyond Geelong – to Mt Macedon, Kilmore Murchison and probably Wangaratta. ——

[Margin note] Each tribe has its particular locality which they consider a sort of inheritance Buckley p. 37

The Jajowurong tribe adjoining the Kūlin on the North west was regarded as friendly; The Mey met and Ber-bira were not so regarded. The Kūlin tribe was divided into Hordes of which the following were the principal; if not all. 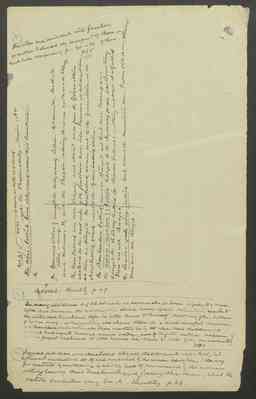 A The tribes are divided into families: or rather I should say composed of them – each tribe comprising from 20 - 60 of them. P.65

[written sideways on page] Note p 1 neri = a cave or hole in a bank. The néri-ballŭk - spoke the Thagūn wūrŭng – Thagūn = No. - lived in the country within these boundaries: - The Yauangillŭm owned the hilly country between Mt Macedon, Heathcote [stone – camp] and Kilmore. They spoke the Thagŭn-wūrŭng language and were all Waang. 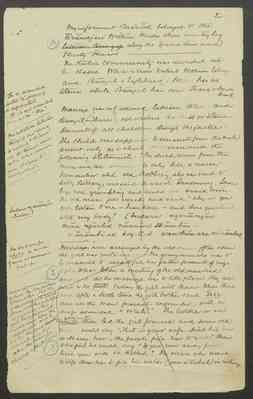 2 A My informant Bairŭk belonged to the Ūrŭndjeri Willŭm Horde whose country lay [between Bunyip- crossed out] along the Yarra [Riv - crossed out] and Plenty Rivers. ———— The Kūlin community was divided into two classes Waa = crow to which William belongs and Būnjil = Eaglehawk. Waa has no totems while Bunjil has one Thara = small Hawk

[Margin Text:] Th is sounded so that “a” following is aspirated – th is not sounded here as in “the”.

[Margin text] The relation between Bŭnjil and Waa is called “Béarn” – i.e a Bŭnjil man and a Waa woman were Béarn to each other.

Marriage was only allowed between Waa and Bunjil (-Thara), not within the class or totem. Descent of all children through the father. The child was supposed to emanate from the male parent only as to which William made the following statements. “The child comes from the man and the woman is only like a nurse. I remember what Old Bobberi, who was next to Billy Billary, once said. It was at Dandenong. Some boys were grumbling and would not mind him. The old man got vexed and said "Why do you not listen to me - I am here - and there you stand with my body." (Indara ngarūngŭn mŭn ngŭrlik nŭnnŭn thŭm bŭn – mŭrŭmbi-ek koy-ū-it wanthŭn-ara mŭrŭmbiek

[Marginal text] See the signs for child [underlined] as made by man or woman put p.

Marriages were arranged by the old men, often when the girl was quite small. The young man she was to be married to used to give her father presents of rugs to give to her. When a meeting of the old men had arranded that the marriage was to take place they all went to the [youth - crossed out] man taking the girl with them. When there and after a little time the girl's brother said Prrr [underlined] and all the men present responded with a deep sounded "Wah!" The brother or an [uncle - crossed out] father's brother or mother's brother then led the girl forward and some old man would say “That is your wife. Don’t hit her or ill use her – the people give her to you”. Then to the girl he would say “If you run away from him you will be killed”. The man who receives a wife thus has to give his sister (own or tribal) in exchange.

[Marginal Text:] 2 Marriages were arranged between the two fathers by themselves, but the girl's fathers had talked it over with his wife before he decided. The girl being promised the old men told the other people and by and bye the great [meeting -crossed out] council decided when the marriage should take place. 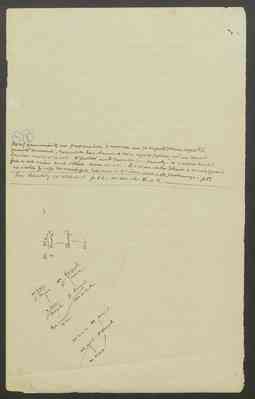 3 p2 The only ceremonies they use preparatory to marriage are in the first place to get their parents' consent, the suitor's best claim is being a good fighter and an expert hunter – so as to be able to protect and provide for a family. X some have five or six wives and others none at all. If a man wishes to have a man’s grown up sister for wife he must give his own – if he has one – in exchange. p 51 For Buckley re elopement p 62. or see also K & K ——— 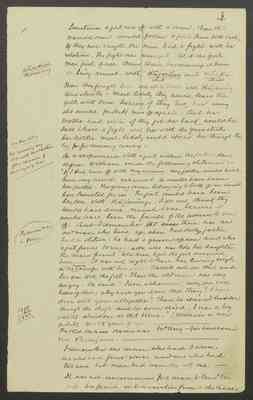 3 Sometimes a girl ran off with a man. Then the married men would follow to fetch them both back. If they were caught the man had to fight with her relatives. The fight was arranged. At it the girls men first of all threw their boomerang at him He being armed with Kūjerŭng (club) and Mŭlka (shield).

Then they fought him one at a time with Kūjerŭng and shield. Most likely they would leave the girl with him because if they took her away she would probably run off again. But her mother and sister if they got her back would be sure to have a fight with her with the yam sticks. Her brother most likely would spear her through the leg [fo- crossed out] for running away.

As to elopement with a girl within the forbidden degrees William made the following statement: - “If I had run off with my cousin my father would have been very much ashamed, as would have been her father. The young men belonging to both of us would have hunted for us. The girl would have been beaten with Kūjerŭngs. I do not think they would have done much to me because it would have been the fault of the woman to run off. But I remember that [once - crossed out] there was an old man who lived up where Ned Kelly's father had a station. He had a grown up son and also a girl from Wangaratta who was like his daughter. The mans friends told him to get the girl married because it was not right to have her living single in the same camp with his son. He did not do this and his son took the girl. Then the old man was very angry. He said “I am ashamed every one will hear of this; why have you done this thing? I have done with you altogether”. Then he speared his son through the thigh and he soon died. I was a boy without whiskers at that time.” (William is now probably 50-55 years of age.

I remember one man who had 3 wives, one who had four wives and one who had two wives but men had usually only one. —— It was not uncommon for a man to lend his wife to a friend or to a visitor from a distance.

See Buckley Her running away deprived her brother of his chance of exchanging her.

The man was a Waa