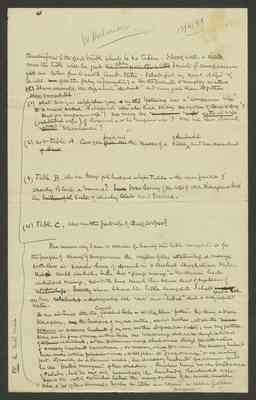 Mr Bulmer 18/4/99 Thanking him for the great trouble which he has taken. I think with a little more the table will be just [the comparative table - crossed out] what I want for comparison with one taken from a central Aust. tribe. I shall feel very much obliged if he will give the following information:- For the present to simplify matters I have separated the different “descents” and can join them together when completed.

(2) as to Table A. Can you [give me - crossed out] find out the name of a sister of Bembuikil and her descendants [of Bem - crossed out]

(4) Table C. Who was the first wife of Dick Cooper?

The reason why I am so desirous of having this table complete is for the purpose of showing by comparison the nature of the relationship + marriages with those in similar lines of descent in a central Australian tribe. This [K - crossed out] central Australian tribe has “group marriage” – the Kurnai had individual marriage, yet both have much the same kind of system of relationships. Finally when I have the table complete I shall [??]?able all the relationship – distinguishing between “own” and “tribal” which is a very important matter.

As an instance take the Central Australian tribes – and their term “father’. Ergo being a Dieri blackfellow, [my - crossed out] the husband of my own mother, all his brothers, and all the "pinnai - crossed out] pirauru or accessory husbands of my own mother and of all her sisters, are my fathers. There are two forms of marriage in these tribes the noa marriage which arises through betrothal of two [person - crossed out] individuals, and the pirauru marriage which arises through the allocation of accessory husband to a woman, or accessory wives to a man. The accessory husbands have access to these pirauru - wives, so that there is “group marriage” as an existing fact. Speaking as a Kurnai would, the “accessory husband” of a woman would be the “biebba minyan” of her children. Bruthen Mungi was the bubba minyan of Tulaba, but he was only nominally the [?binbad?] of Bembuikils wife. Here is the vital distinction between the marriage system of the central Australian tribe + that of the Kurnai. For this the table are required as well as of other peoples

[written in the left side margin] PS Re Prickly Moses