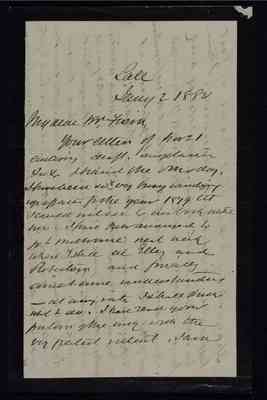 Your letter of Nov 21 enclosing draft [??] +c +c to hand the other day. I have been so very busy winding up affairs for the year 1879 that I could not see to our work until now. I have now arranged to go to Melbourne next week when I shall see Ellery and Robertson and finally come to some understanding - at any rate I shall know what to do. I have sent your portion of the work with the very greatest intent. I am 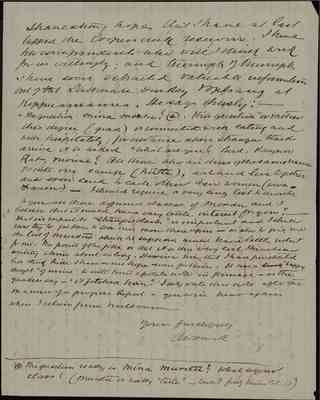 I have strong hopes that I have at last tapped the Coopers Creek resevoir. I have two correspondants who will I think work for us willingly; and triumph of triumphs I have even extracted valuable information out of that Lutheran Donkey Vogelsang at Kopperamanna. He says thusly:"the question mina mordu? x. This question or rather this degree (grad) is connected with eating and with hospitality; for instance when stranger blacks arrive it is asked "what are you? Bird, Kangaroo, Rat, Mouse? All those who are thus of the same name go into one camp (hütte), eat and live together and even lend to each other their women (wives - Frauen) - I should require a very long list to describe to you all these different classes of mordu and I believe that it would have very little interest for you." that in respect to "stranger blacks" is important and I shall now try to get him to tell me more there upon- as also to give me the list of Mordus which he supposes would have little interest for me. The point of the joke is that it is this very list I have been writing to him about so long. However now that I have penetrated his thick hide I have some hope even for him. It was a [lucky - crossed out] "Happy thought" of mine to write to him a polite note in German - as the Yankees say - "it fetched him." I only wrote the note after the manner of a progress Report - you will hear again when I return from Melbourne Yours faithfully AW Howitt

[Footnote] x The question really is Mina Mordu? What is your class? (mordu is really "taste" but I freely translate it) 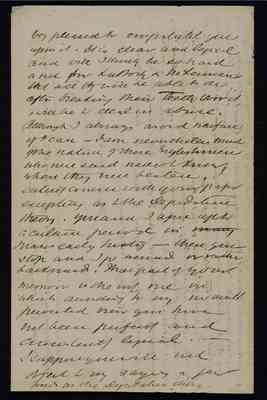 very pleased to congratulate you upon it. It is clear and logical and will I think be so hard a nut for Lubbock & McLennan that all they will be able to do after breaking their teeth over it + will be to deal in abuse. Although I always avoid warfare if I can - I am nevertheless much of the nature of these Englishmen who were said never to know when they were beaten. I entirely concur with your paper excepting as to the Degraditive theory. You and I agree up to a certain period in [many - crossed out] mans early history - there you stop and I go ahead or rather backward. That part of your memoir is the only one in which according to my no doubt perverted view you have not been perfect and consistently logical. ---

I suppose you will not object to my saying a few words in the Degenerative theory.