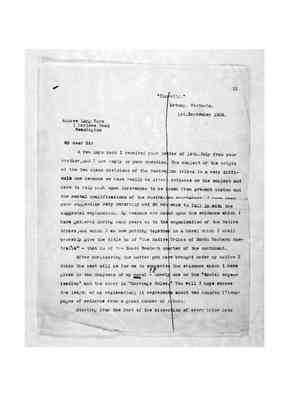 A few days back I received your letter of 19th. July from your brother, and I now reply to your question. The subject of the origin of the two class divisions of the Australian tribes is a very difficult one because we have really no direct evidence on the subject and have to rely much upon inferences to be drawn from present custom and the mental qualifications of the Australian aborigines. I have read your suggestion very carefully but am not able to fall in with the suggested explanation. My reasons are based upon the evidence which I have gathered during many years as to the organization of the Native tribes, and which I am now putting together in a novel which I shall probably give the title to of "The Native Tribes of South Eastern Australia" - that is of the South Eastern quarter of the continent.

After considering the matter you have brought under my notice I think the best will be for me to summarise the evidence which I have given in two chapters of my novel !! - namely one on the "Social organisation" and the other in "Marriage Rules." You will I hope excuse the length of my explanation; it represents about two hundred f ' lscppages of evidence from a great number of tribes.

Starting from the fact of the bissection of every tribe into 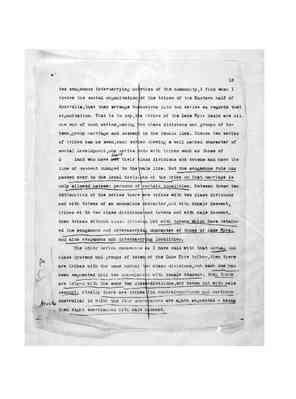 two exogamous intermarrying moieties of the community, I find when I review the social organization of the tribes of the Eastern half of Australia, that they arrange themselves into two series as regards that organization. That is to say, the tribes of the Lake Eyre Basin are all one end of each series, having two class divisions and groups of totems,group marriage and descent in the female line. Thence two series of tribes can be seen, each series shewing a well marked character of social development, one series ends with tribes such as those of G land who have [but - crossed out] lost their class divisions and totems and have the line of descent changed to the male line. But the exogamous rule has passed over to the local divisions of the tribe so that marriage is only allowed between persons of certian localities. Between these two extremities of the series there are tribes with two class divisions and with totems of an anomalous character, but with female descent, tribes with two class divisions and totems and with male descent, then tribes without class division but with totems which have retained the exogamous and intermarrying character of those of Lake Eyre; and also exogmaous and intermarrying localities.

[written in left margin] A Arunta 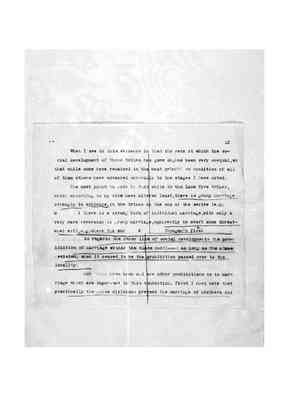 What I see in this evidence is that the rate at which the social development of these tribes has gone on, has been very unequal, so that while some have remined in the most primitive condition of all of them others have advanced severally to the stages I have noted.

The next point to note is that while in the Lake Eyre tribes, which according to my view have altered least, there is group marriage strongly in evidence, in the tribes at the end of the series (e.g. G ) there is a strong form of individual marriage, with only a very rare reversion to group marriage. apparently to avert some threatened evil, e.g. where the Aur A (Nungan's fire) .

But there have been and are other prohibitions as to marriage which are important in this connection. First I must note that practically the class divisions prevent the marriage of brothers and 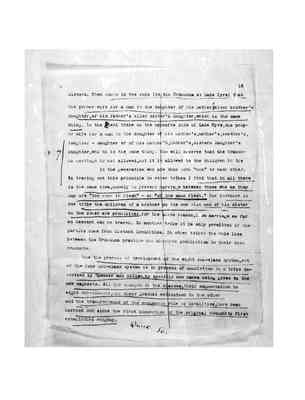 sisters. Then comes the rule (in the Urabunna at Lake Eyre) that the proper wife for a man is the daughter of his mother's elder brother's daughter, or his father's elder sister's daughter, which is the same thing. In the Dieri tribe on the opposite side of Lake Eyre, the proper wife for a man is the daughter of his mother's, mother's, beother's [sic], daughter - daughter or of his mother's, father's, sister's daughter's daughter, which is the same thing. You will observe that the Urabunna marriage is not allowed, but it is allowed to the children in the in the generation who are thus born "noa" to each other. In tracing out this principle in other tribes I find that in all there is the same idea, namely to prevent marriage between those who as they say are "too near in flesh" - or "of the same flesh". For instance in one tribe the children of a brother on the one side and of his sister on the other are prohibited, for the above reason, from marriage as far as descent can be traced. in another tribe it is only permitted if the parties come from distant localities. In other tribes the rule lies between the Urabunna practice and absolute prohibition to their descendants.

Now the process of development of the eight sub-class system, out of the four sub-class system isin process of completion in a tribe described by Spencer and Gillen, by specific new names being given to the new segments. All the changes in the classes, their segmentation to eight sub-classes, and their gradual extinction in the other and the transferrence of the exogamous rule to localities, have been carried out since the first bissection of the original community first established exogamy.

Last edit 29 days ago by ALourie 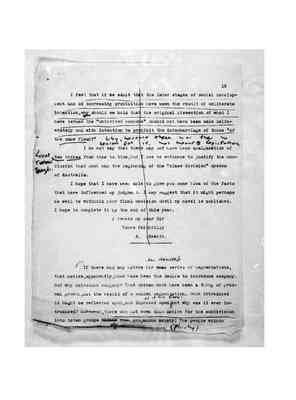 I feel that if we admit that the later stages of social development and of increasing prohibition have been the result of deliberate intention, why should we hold that the original bissection of what I have termed the "undivided commune" should not have been made deliberately and with intention to prohibit the intermarriage of those "of the same flesh?" Why, because there was then no reason for it. Why impose legislation

I do not say that there may not habe been amalgamation of two tribes from time to time, but I see no evidence to justify the conclusion that such was the beginning og the "class division" system of Australia.

I hope that I have been able to give you some idea of the facts that have influenced my judgment. I may suggest that it might perhaps be well to withhold your final decision until my novel is published. I hope to complete it by the end of this year.

I remain my dear Sir

If there was any motive for [this-crossed out] in Howitt's series of segmentations, that motive, apparently, must have been the desire to introduce exogamy. But why introduce exogamy? That system must have been a thing of gradual growth, not the result of a sudden segmentation. Once introduced it might be reflected upon, and improved upon, as it has been, but why was it ever introduced? Moreover, there was not even this motivefor the subdivision into totem groups [within - crossed out] of each exogamous moiety: The people within (p1. stay)