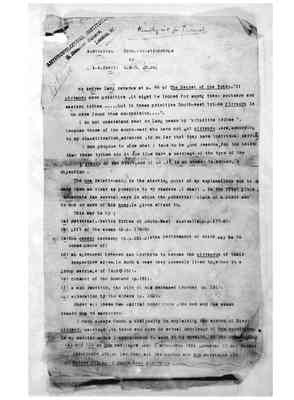 Mr Andrew Lang remarks at p. 55 of The Secret of the Totem, "If pirrauru were primitive, it might be looked for among these southern and eastern tribes .....but in these primitive South-east tribes pirrauru is no more found than subincision....".

I do not understand what Mr Lang means by "primitive tribes", because those of the south-east who have not got pirrauru, are, according to my classification, advanced, in so far that they have individual marriage.

I now propose to show what I take to be good reasons, for the belief that those tribes did at one time have a marriage of the type of the pirrauru of the Dieri, and if so, it is an answer to Mr Lang's objection.

The noa relationship is the starting point of my explanations and to make them as clear as possible to my readers, I shall, in the first place, enumerate the several ways in which the potential claim of a Dieri man to one or more of his noas, is given effect to.

Under all these new marital conditions, the man and the woman remain noa to each other.

I have always found a difficulty in explaining the system of Dieri pirraurus marriage, to those who have no actual knowledge of the conditions. In my earlier works I endeavoured to meet it by speaking of the [??] under (a) and (b) as noa marriages, but I abandoned this, because it was rather indefinate [sic], in so far that all the unions are noa marriages. In my Native Tribes of South-East Australia 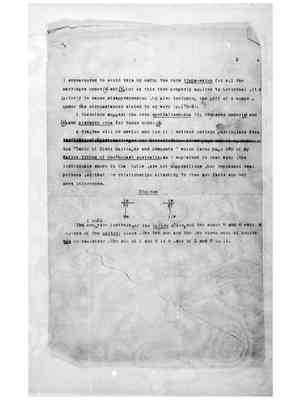 I endeavoured to avoid this by using the term tippa-malku for all the marriages under (a) and (b), but as this term properly applies to betrothal, it is likely to cause misapprehension, by also including the gift of a woman, under the circumstances stated in my work (p. 178-9).

I therefore suggest the term specialised-noa for the cases under (a) and (b) and pirrauru-noa for those under (c).

A diagram will be useful and for it I extract certain particulars from the "Table of Dieri Marriages and Descents" which faces page 150 of my Native Tribes of South-East Australia. As I explained in that work, the individuals shown in the table, are not suppositious, but represent real persons, so that the relationships attaching to them are facts and not mere inferences. 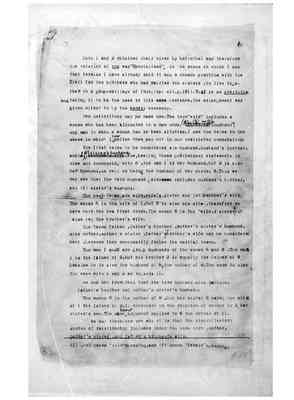 Both 1 and 2 obtained their wives by betrothal and therefore the relation of noa was "specialized", in the sense in which I use that term. As I have already said it was a common practice with the Dieri for two brothers who had married two sisters, to live together in a group-marriage of four. (op. cit.p.181). That is as piarrauru and taking it to be the case in this instance, the arrangement was given effect to by the kandri ceremony.

Two definitions may be made now. The term "wife" includes a woman who has been allocated to a man under (a), (b) or (c) "husband", any man to whom a woman has so been allotted. I use the terms in the sense in which I now define them, and not in our restricted connotation.

The first terms to be considered are husband, husband's brother, and (a) sister's husband. Now, bearing these preliminary statements in view and commencing with 5, the man 1 is her husband, but 2 is also her husband, as well as being the husband of her sister 6. Thus we may see that the term husband also includes husband's brother, and (f) sister's husband.

We can see from this that the term husband also includes father's brother and mother's sister's husband. 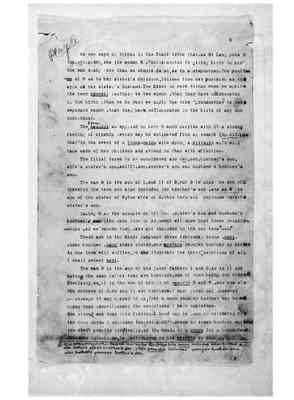 No one says or thinks in the Dieri that, as Mr Lang puts it (op.cit.p.46), she the woman 6, "collaborated in giving birth to him" the man 9, any more than we should do so, as to a stepmother. The position [on -crossed out] of 6 as to her sister's children, follows from her position as the wife of her sister's husband. The Dieri no more thinks when he applies the term ngandri (mother) to two women, that they have collaborated in the birth, than we do when we apply the term "grandmother" to two separate women, that they have collaborated in the birth of any one individual.

The term ngandri as applied to both 5 and 6 carries with it a strong feeling of kinship, which may be estimated from my remark (op.cit.p184) that " in the event of a tippa-malku wife dying a pirrauru wife will take care of her children and attend to them with affection.

Taking 5 as the example of (f) son, sister's son and husband's brother's son, the same line of argument will show that those relation-ships, as we reckon them, are all included in the one term "son".

There are in the Dieri language three fraternal terms, neyi, elder brother, kaku elder sister, and ngatata younger brother or sister. As one term will suffice, to illustrate the inter-relations of all, I shall select neyi.

The man 9 is the son of his joint fathers 1 and 2, so is 11 and having the same father they are brothers, one of them being the elder. (1) Similarly, as 11 is the son of his joint ngandri 5 and 6, who are also the mothers of 9, he and 11 are brothers. I must point out, however ~ strange it may appear to us, that a man's younger brother may be older than himself, under the conditions I have explained.

How strong and real this fraternal bond may be, can be estimated by the case which I recorded (op.cit.p.237), where an elder brother suffered the death penalty stoically, at the hands of a pinya for a blood-feud incurred by evil magic, attributed to his ngatata or younger brother. 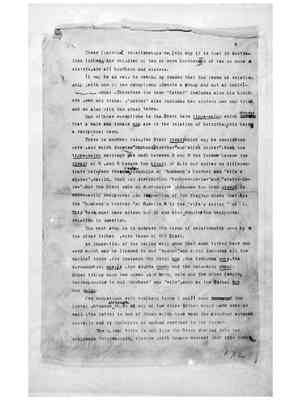 6 These fraternal relationships explain why it is that in Australian tribes, the children of two or more brothers or of two or more sisters, are all brothers and sisters.

It may be as well to remind my reader that the terms of relationship, with one or two exceptions, denote a group and not an individual. Therefore the term "father" includes also his brothers, own and tribal, "mother" also includes her sisters own and tribal, and so also with the other terms.

One of those exceptions is the Dieri term tippa-malku which denotes that a male and female noa are in the relation of betrothal, this being a reciprocal term.

There is another term, the Dieri yimari which may be considered here, and which denotes "husband's brother" and "wife's sister". When the tippa-malku marriage was made between 2 and 6 the former became the yimari of 5, and 5 became the yimari of 2. In our system we differentiate between these relationships of "husband's brother and "wife's sister", calling them for distinction "brother-in-law" and "sister-inlaw". But the Dieri make no distinction, because the term yimari is necessarily reciprocal. An inspection of the diagram shows that 1, is the "husband's brother" of 6, while 6 is the "wife's sister" of 1. This term must have arisen out of and also denotes the reciprocal relation in question.

The next step is to compare the terms of relationship used by the other tribes, with those of the Dieri.

An inspection of the tables will show that some tribes have one word which may be likened to our "spouse", and which includes all the marital terms, for instance the Dieri noa, the Urabunna nupa, the Kurnandaburi abaija, and Arunta unawa and the Watu-Watu nopui. Other tribes have two names, one being male and the other female, corresponding to our "husband" and "wife", such as the Kurnai bra and maian.

For comparison with the Dieri terms I shall take [those of -crossed out] the Kurnai, because although those of any of the other tribes would have done as well, the latter is one of those which have made the greatest advance socially and is therefore in marked contrast to the former.

The Kurnai tribe is not like the Dieri divided into two exogamous intermarrying classes, with female descent, but into numerous 172