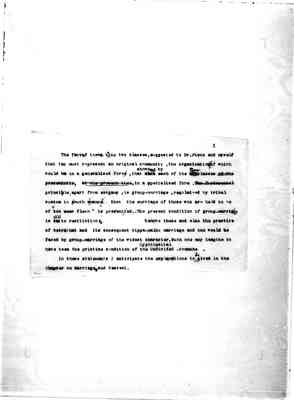 The fact of there b^eing two classes, suggested to Dr. Fison and myself that they must represent an original community, the organisation of which would be in a generalised form, that shown by each of the two classes in a specialised form. principle, apart from exogamy, is group-marriage, regulated by tribal custom in such [a manner?] that the marriage of those who are held to be of "too near flesh" is prevented. The present condition of group-marriage is that due to restrictions, Remove these and also the practice of betrethat and its consequent tippa-malku marriage and one would be faced by group-marriage of the widest character. Such one may imagine to have been the pristine condition of the hypothecital Undivided commune.

In these statements I anticipate the explanations to ^be given in the Chapter on Marriage and descent. 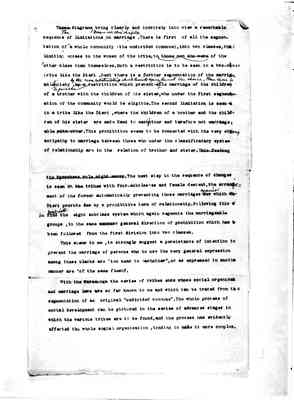 ['These' crossed out] The diagrams bring clearly and concicely into view a remarkable sequence of limitations on marriage given in this chapter. There is first of all the segmentation of a whole community (the undivided commune), into two classes, thus limiting access to the women of the tribe, to ['those' crossed out] men ['who were' crossed out] of the other class than themselves. Such a restriction is to be seen in a two-class tribe like the Dieri. Next there is a further segmentation of the marrigable moiety, ['by a' crossed out] by the noa relationship which ['limits' crossed out] [ap...?] limit the choice. Then there is a further restriction which prevents the marriage of the children of a brother with the children of his sister, who under the first segmentation of the community would be eligible. The second limitation is seen in a tribe like the Dieri, where the children of a brother and the children of his sister are made Kami to each other and therefore not marriage= able ['with other' crossed out]. This prohibition seems to be connected with the very strong antipathy to marriage between those who under the classificatory system of relationship are in the relation of brother and sister. ['This feeling' crossed out]

['the Ngarahana rule might marry' crossed out] The next step in the sequence of changes is seen in the trihes with four-subclasses and female descent, the arrange= ment of the former automatically preventing those marriages ['for' crossed out] against which Dieri provide ['for' crossed out] by a prohibitive term of relationship. Following this we [went into?] find the eight subclass system which again segments the marriageable groups, in the same general direction of prohibition which has been followed from the first division into two classes.

This seems to me, to strongly suggest a persistance of intention to prevent the marriage of persons who to use the very general expression among these blacks are "too near to eachother", or as expressed in another manner are "of the same flesh".

With the Waraminga the series of tribes ends whose social [organis..] and marriage laws are so far known to me and which can be traced from the segmentation of an original "undivided commune". The whole process of social development can be pictured in the series of advanced stages in which the various tribes are to be found, and the process has evidently affected the whole social organisation, tending to make it more complex. 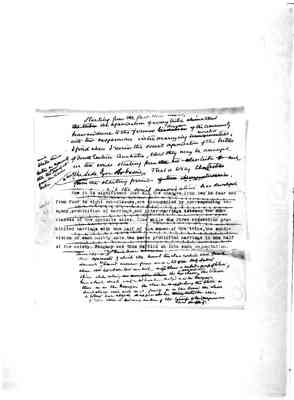 Now it is significant that all the changes from two to four and from four to eight sub-classes, are accompanied by corresponding exogamy, prohibition of marriage, and inter-marriage between two subclasses of the opposite sides. Thus while the first bissection prohibited marriage with one half of the women of the tribe, the subdivision of each moiety into two parts prohibited marriage in one half of the moiety. Exogamy was thus carried on into each segmentation. 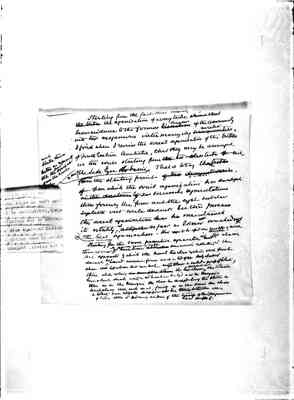 ['the tribes' crossed out] Starting from the fact that the organisation of every tribe bears evidence to the former ['bisection' crossed out] division of the community into two exogamous intermarrying ['communities' crossed out] [.......] I find when I review the social organisation of the tribes of South Eastern Australia, that they may be arranged in two series starting from two-class tribes such as those of the Lake Eyre [basin?] ^and [.....] there tribes as regard that the ^[.... ...... ...] of all the Austro tribes. That is to say those tribes form the starting point ['of two divergent series' crossed out]. of [..an] which the social organization has developed ['in the direction' crossed out] by successive segmentations thus forming the form and the eight subclass [se.....] with male descent: see this process the recent organisatio nhe maintained its [..tality], so far as I know [cracked...] * the local organisation. this [.......]